23 Hours In San Francisco With Kids 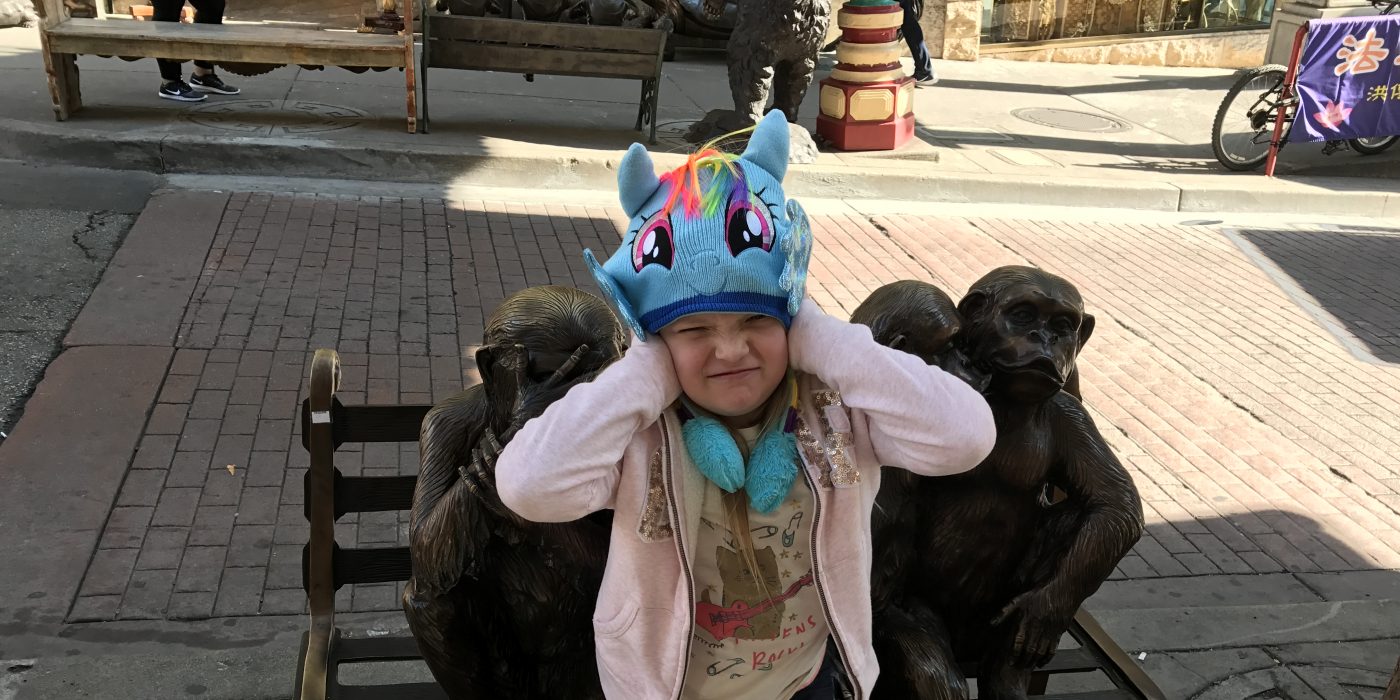 This post is sponsored by mifold® the Grab-and-Go Booster, who ended up totally saving the day on this trip! 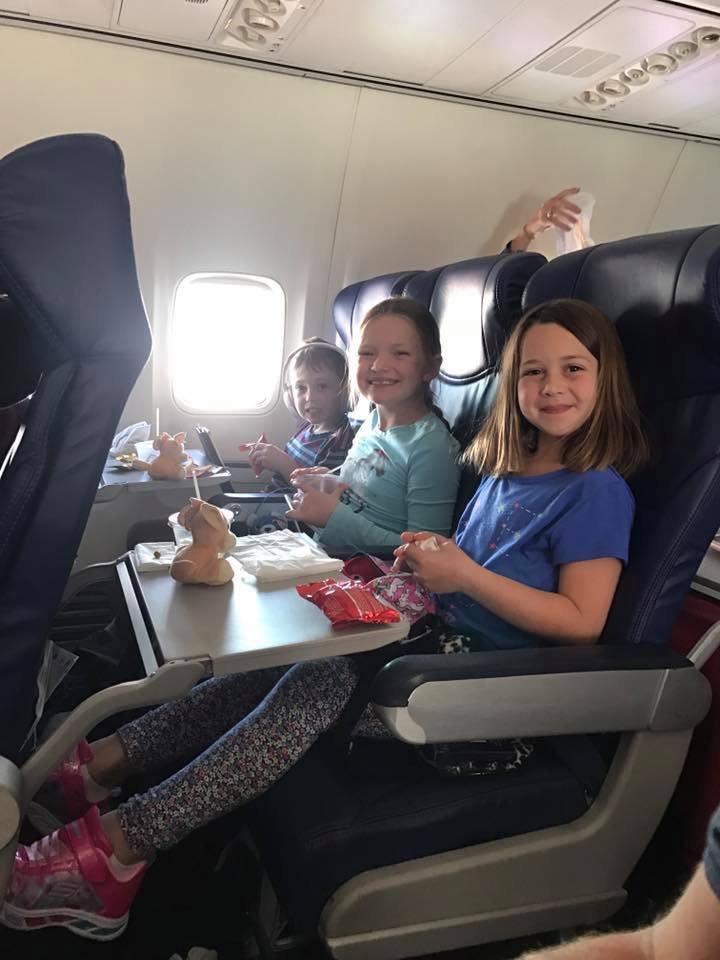 For the past couple of years, I have been working on putting together a big family vacation. We had all planned internationally but decided instead to go somewhere a little closer. I’m so glad we did! 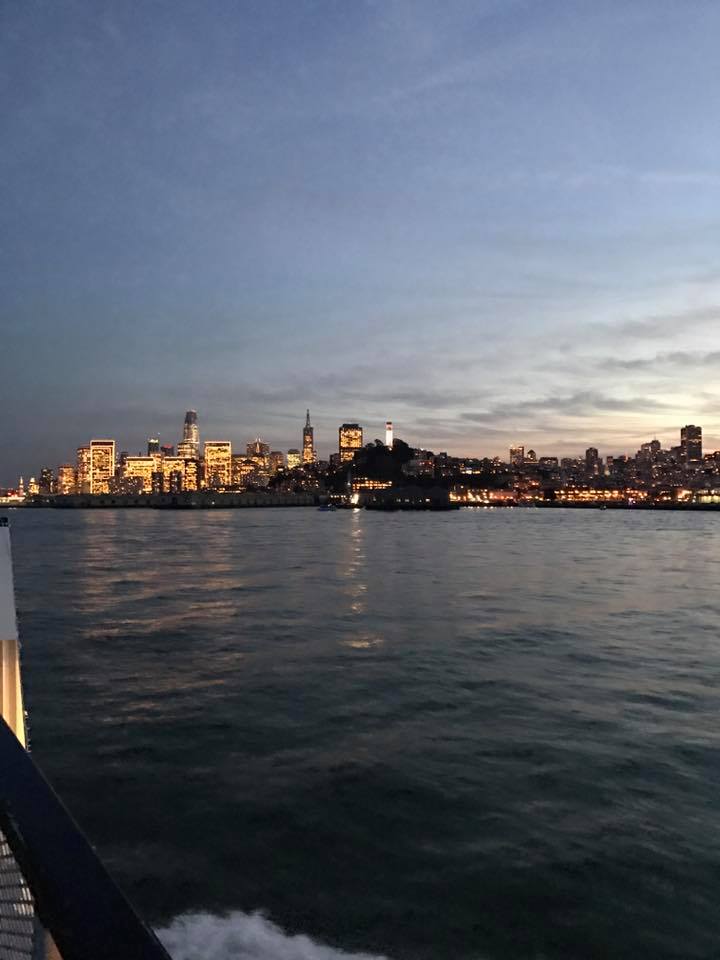 With quick flights to San Francisco from Orange County, we started our vacation within hours of leaving our home! If you are helping friends and family travel more, and especially if they are nervous on airplanes, quick getaways like this are the best!

We also encouraged everyone to go with carry-on only luggage so that we didn’t have to wait for our bags. This too adds more vacation time to our vacation, but you have to get strategic in how you pack. 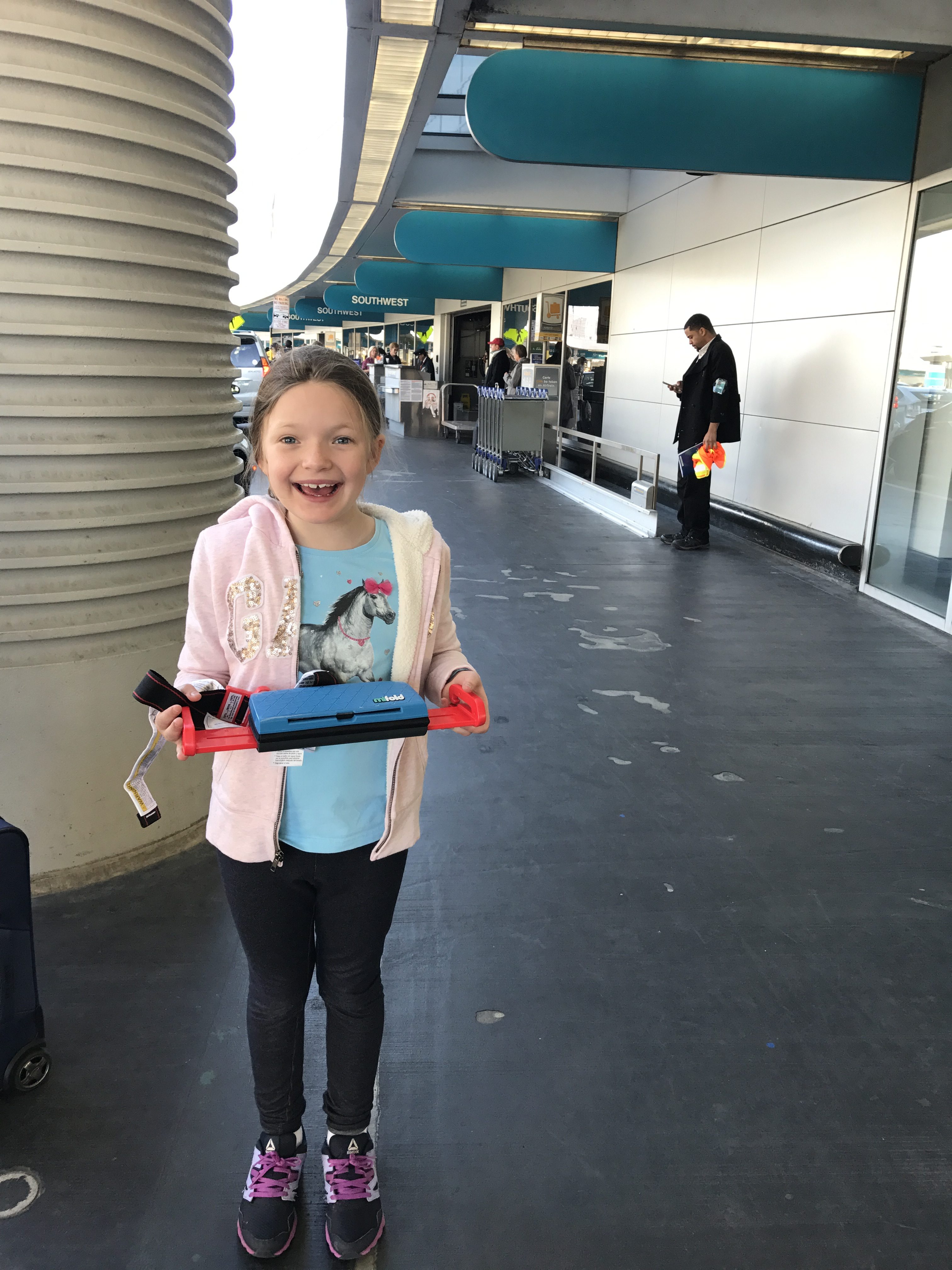 For us that just meant using packing cubes to squish in everything we needed and bringing our mifold® the Grab-and-Go Booster.

Here is more about mifold: it is the most advanced, compact, and portable child car safety seat in the world. It’s more than 10x smaller than a regular booster and it’s just as safe.  mifold works in the exact opposite way to a traditional booster seat.  Instead of lifting the child up, mifold brings the seatbelt down. Emmy is well into the recommended age range for its use of 4 years and up too!

We brought it with us because we planned to take taxi’s and the like, to and from the airport and the rest of the time we would use trollies so we planned to leave it in the room then. But because it was so small, Ashley just kept it in her small backpack just in case. After what happened in San Francisco and back home, we plan to carry it with us where ever we go from now on! 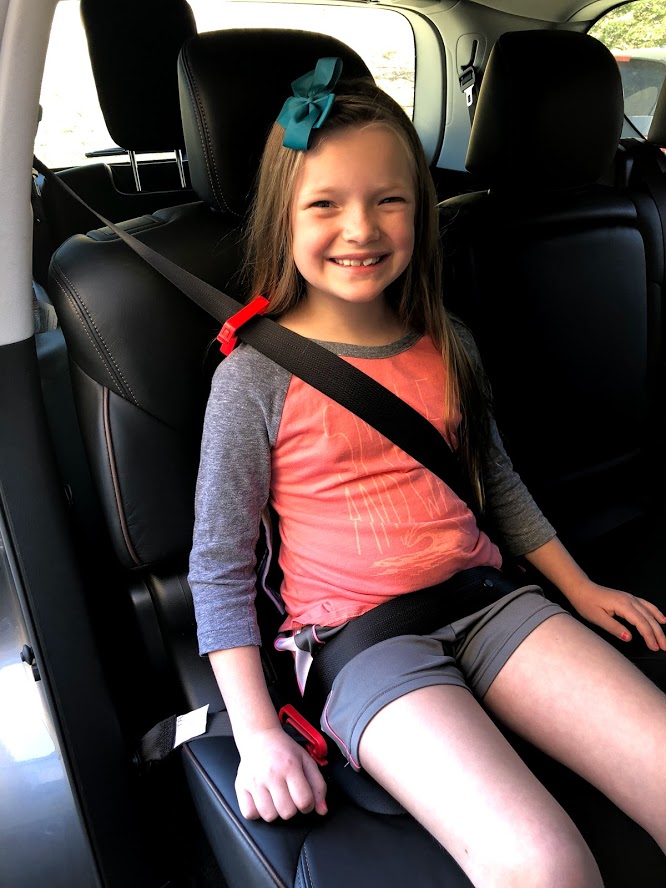 Here is a picture of Emmy using the mifold.

Because she is so tall, everyone assumes that she no longer needs a booster, which is completely untrue. We never let her drive without one. Boosters are for belt positioning not to raise them up in the car, which a lot of people don’t understand. That is why we are so dedicated to using one as long as needed. Maddie and Ash were a lot shorter and didn’t stop using them until they were 12! 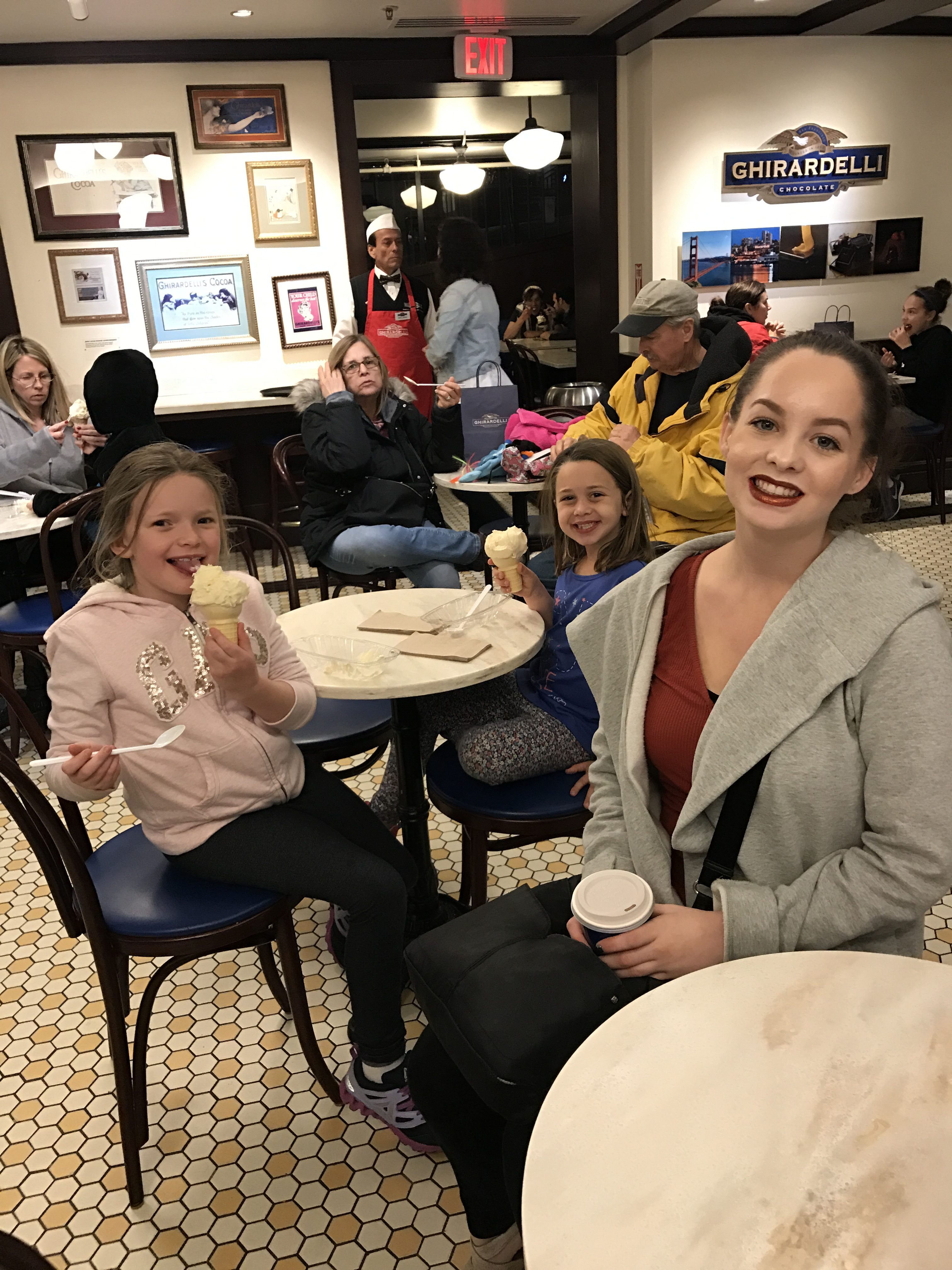 Our first (and what turned out to be only) night in San Francisco we explored close to our hotel in Fisherman’s Wharf. That is one of my favorite areas. We had Italian food, as we pretty much always do on our first night in a new city. Italian food is hard not to love, I mean when was the last time you had bad spaghetti? So we find a good spot to eat and then plan the rest of our meals once we are in the area and can ask locals for their favorite spots.

We also had ice cream and hot chocolate. It was a bit cold for ice cream, but when in Rome, I mean San Francisco… 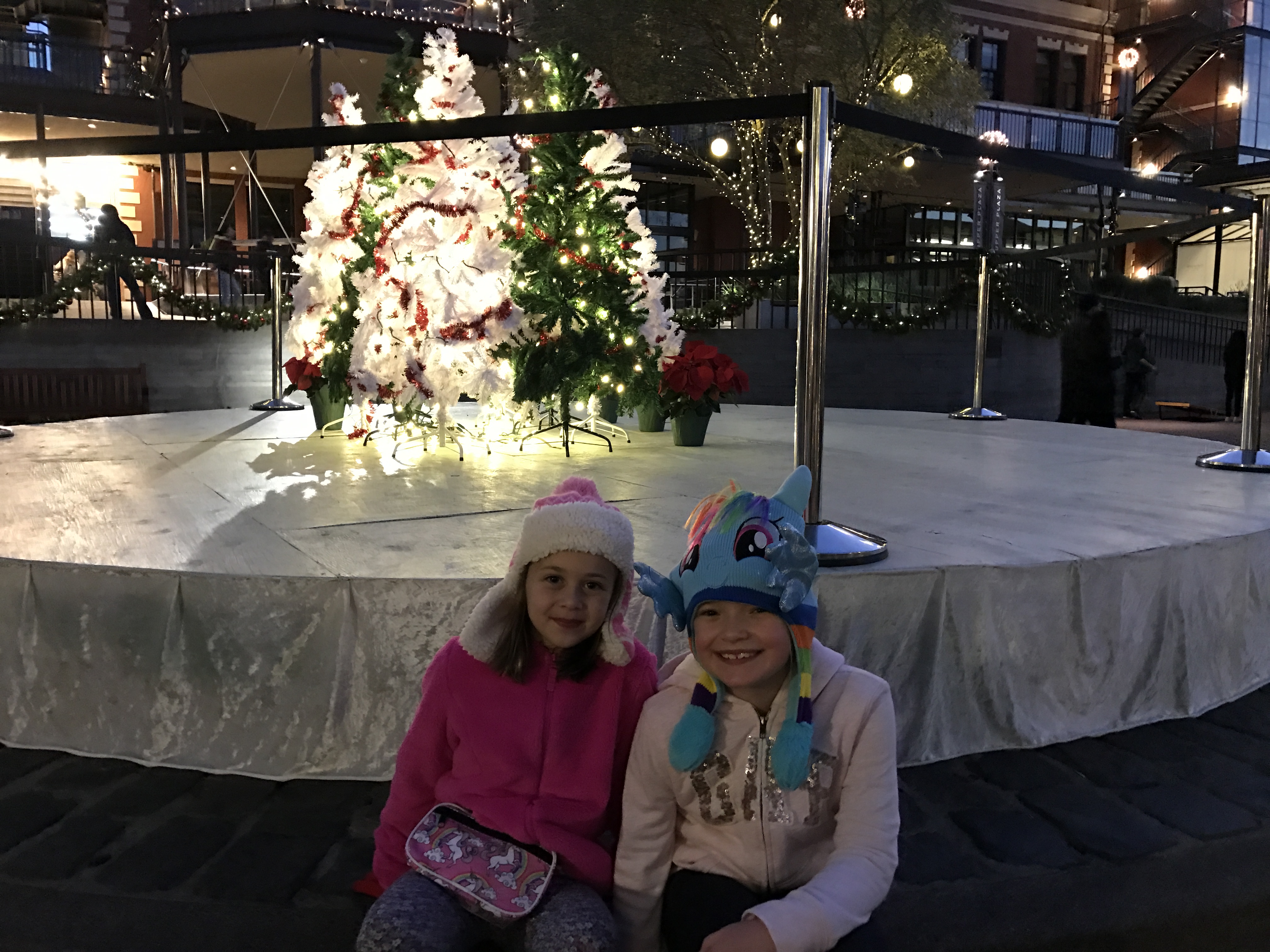 The next day we had breakfast at the hotel and then set out for a full day of sightseeing. We had planned to take the trolly to China Town, have lunch there, take a boat ride under the Golden Gate Bridge and then do some holiday activities. We got so far as China Town and then our vacation turned into a mad dash to get home… 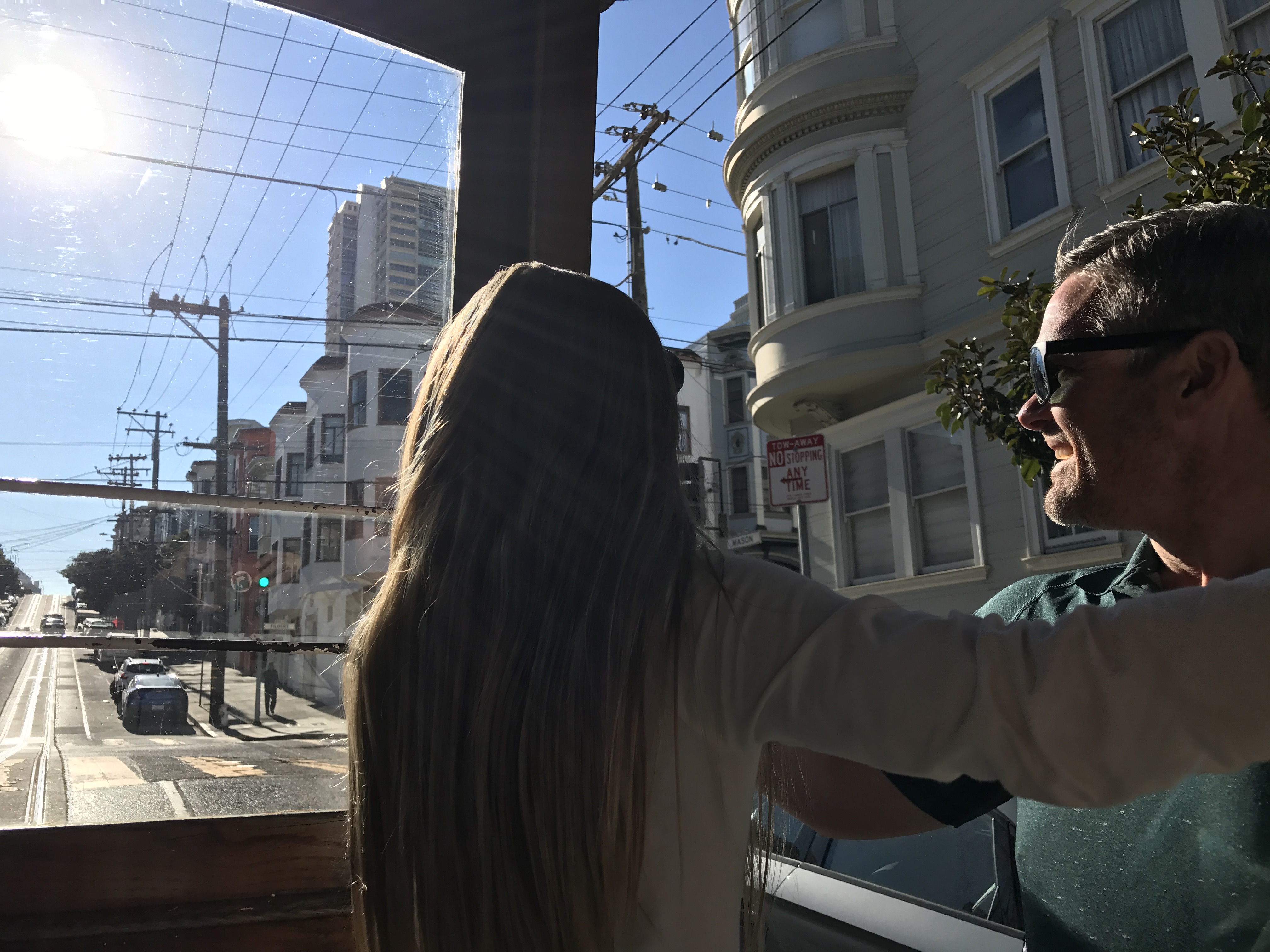 The couple hours out and about the town were awesome though! 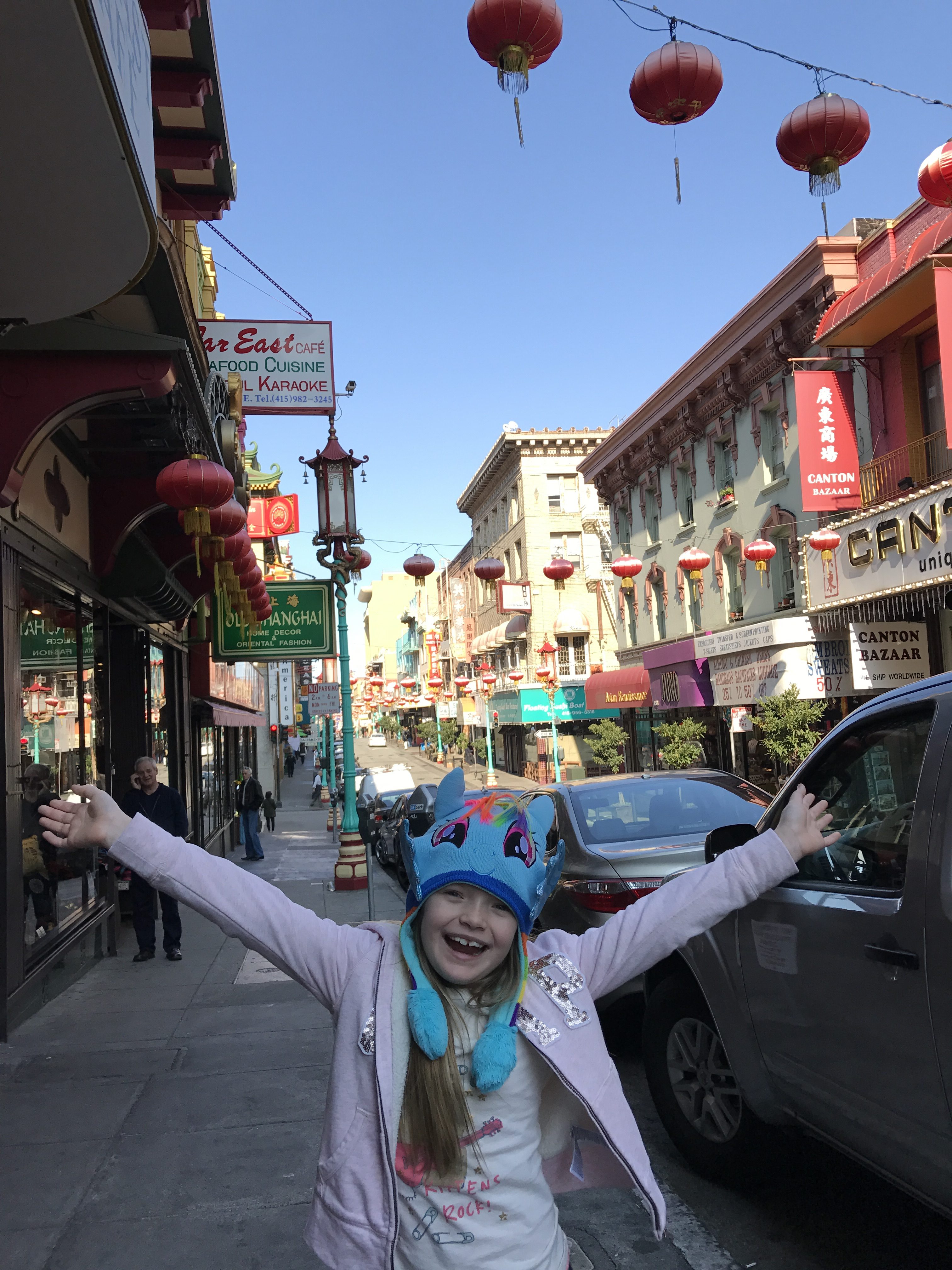 This is one of Emmy’s and Maddie’s favorite places. They love all the little shops where you can buy everything from traditional Chinese Dress Clothes to fanny packs… and believe me, we have bought both of those things here before. 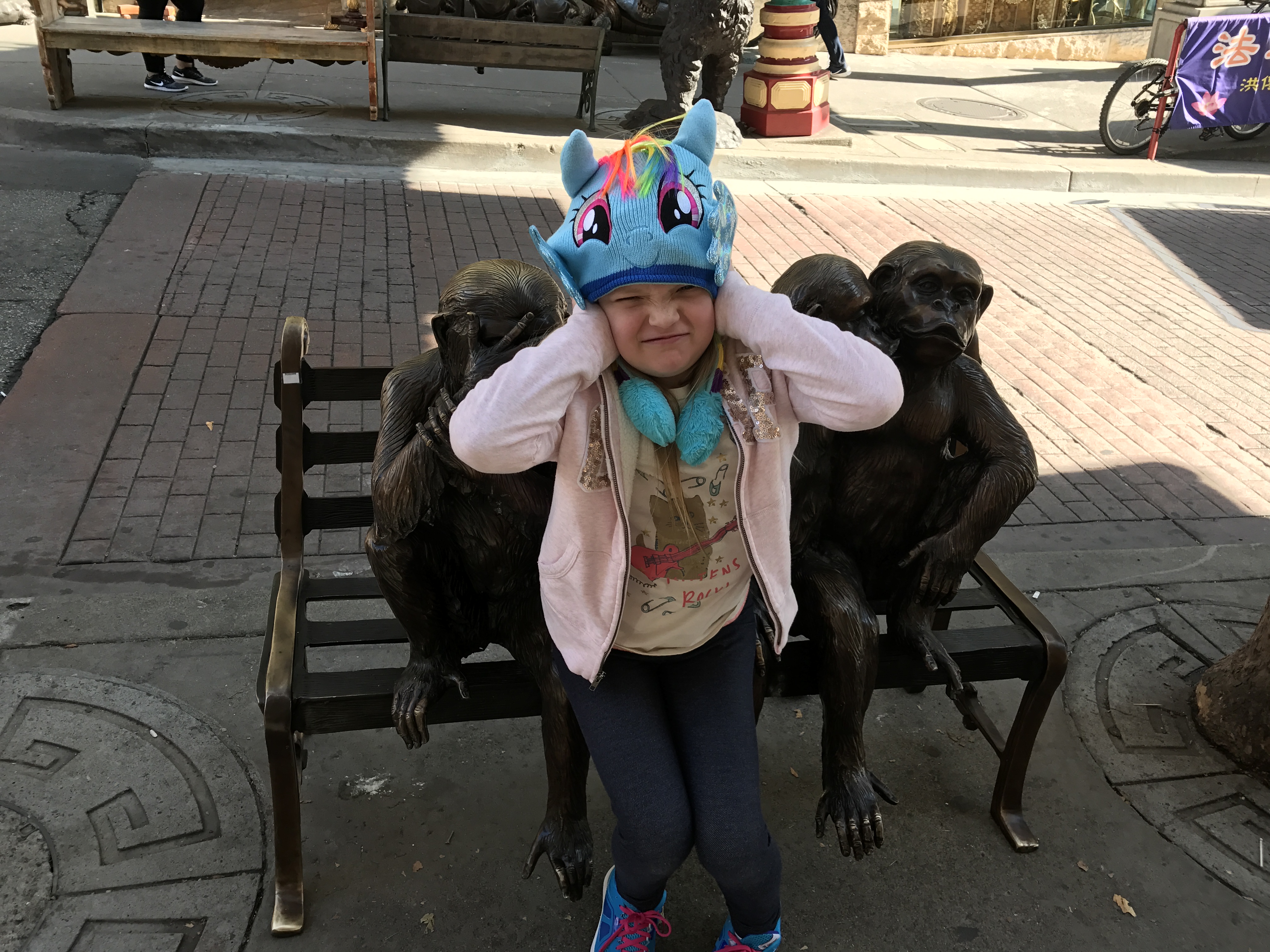 I, personally, am in it for the food though. There are some great restaurants here. 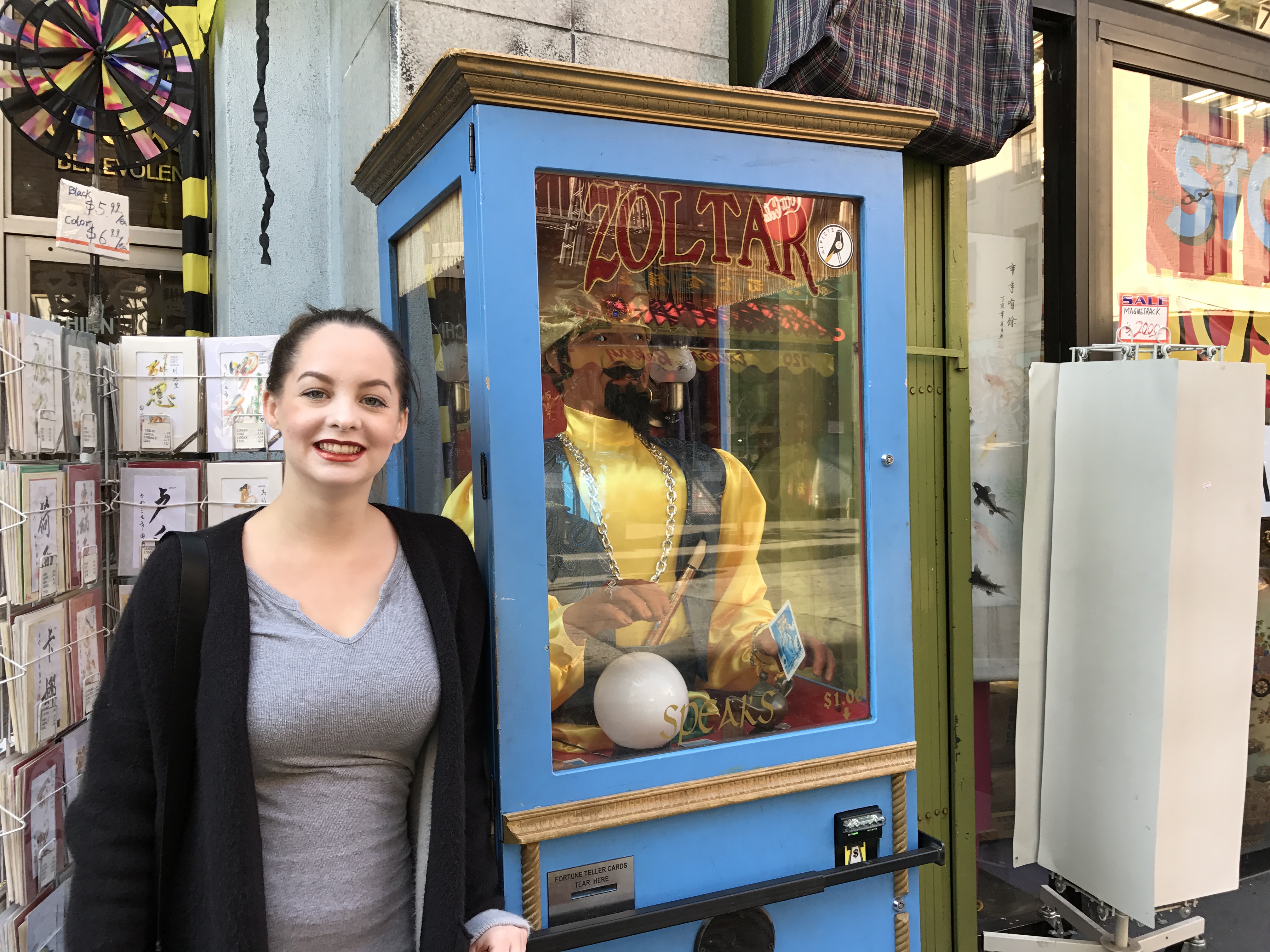 And then there is just the excitement of being in the heart of the city with so much history. We would be happy here even if all we did was just wander and explore with no plans at all… 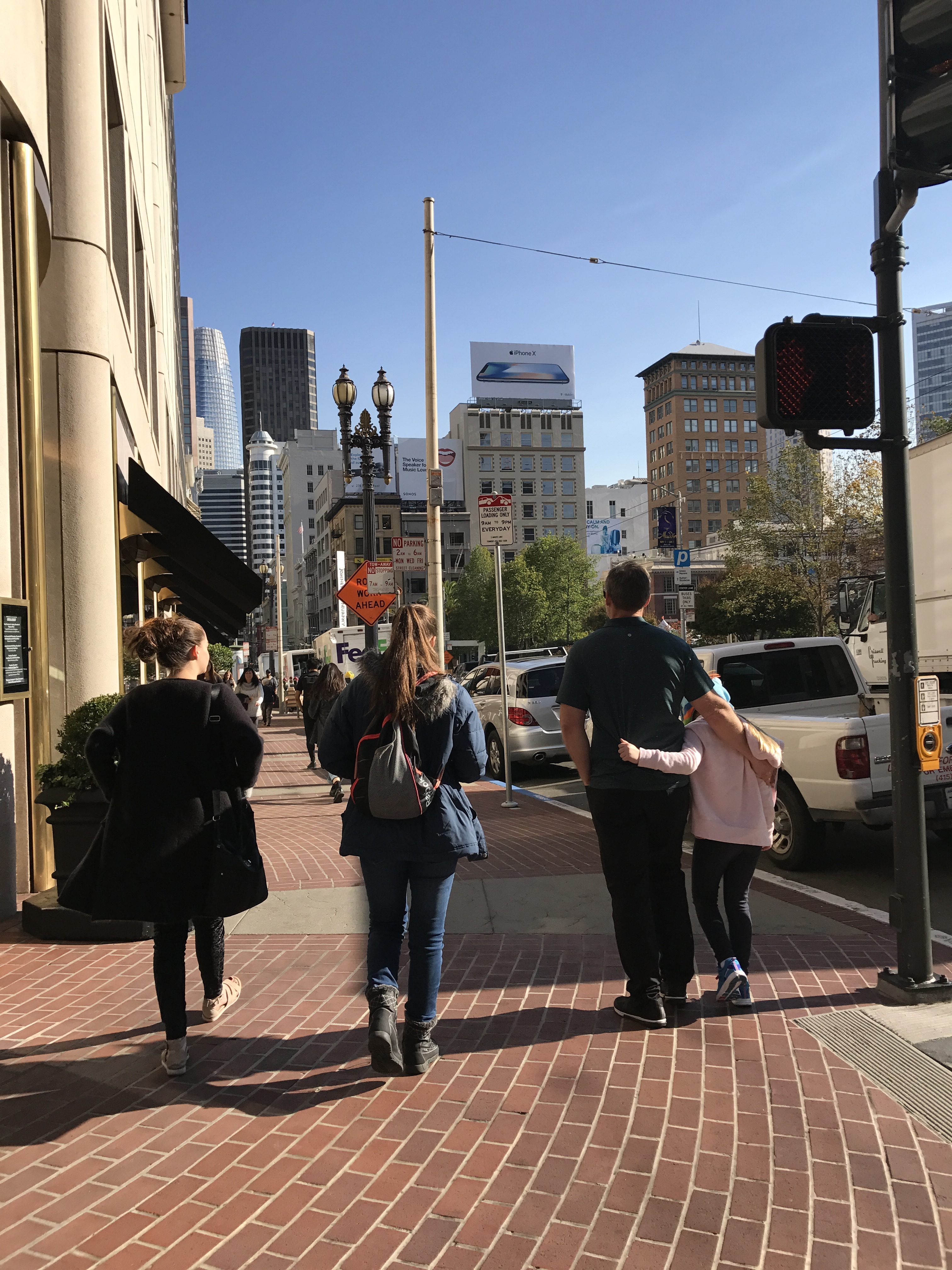 Right after I took this picture, all of our phones started beeping and ringing and lighting up like the 4th of July, but not in a good way. Our neighbors were messaging that there was a big fire close to home and then we started to get evacuation notices too.

We weren’t immediately concerned because we have a house sitter for our pets so we contacted them to get our pets out ASAP. Unfortunately, they were unable to get our pets into their carriers. That is when we started to think we needed to get back home as quickly as we could.

Had our pets not been in our home, we would have been sad over losing our home (that is an understatement), but everything in our home and our home itself can be replaced. Our pets couldn’t be, so we felt like we really needed to try to get back and get them out if we could. We also have a pet on medication and we knew that even if our house survived, it would be days before we would be able to get to them, and too long for her to go without medication.

We quickly devised a plan. Pete was going to leave right from where we were and catch whatever flight he could to get back to our house the quickest. The girls and I would go to the Trolly station and make our way to the hotel, checkout, catch a Taxi and then head to the airport and get on the next flight home.

Then Ashley remembered that she brought the mifold with her. I felt such relief! That meant that we could catch a ride together to the hotel, grab our bags and get to the airport all together quickly. We wouldn’t have to split up and we wouldn’t have to risk missing the next flight.

Our story has a very happy ending. We made it to the airport just in time to catch a flight leaving in 15 minutes. It was a little tense for a bit, but catching that flight was the first challenge and we made it.

As soon as we landed, we got in our car, drove to my sister’s house, and dropped the kids off.

Then Pete and I worked our way home. We were very lucky that a law enforcement officer allowed us into our neighborhood after we promised to grab and go- which we were happy to do. Had the flames been any closer, we obviously would have turned away knowing that we had tried our best, but we had enough time to get the cats and the fish! 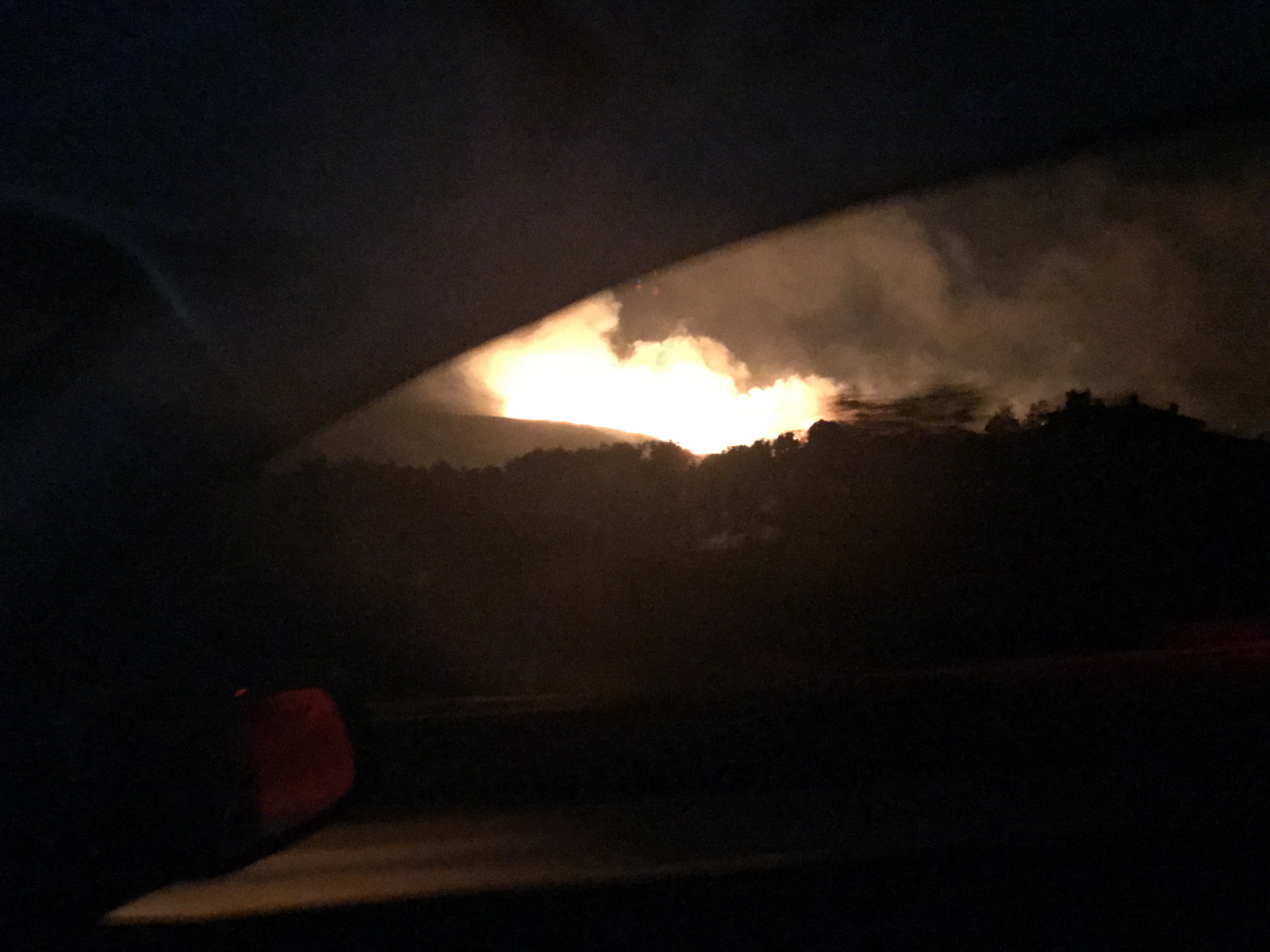 As we were driving away, I snapped this picture. The fire was on two sides of our home. This was across a road and was the farthest fire of the two around our house. The one on the other side was close enough that we could feel the heat from the flames.

I think we were in our house for less than 3 minutes.

I haven’t moved that quick in a long time. Ha! We grabbed the cats and tossed them into their carriers and then I scooped the fish out with my hands. I don’t recommend doing that, but we also had no electricity so I was using the light from my cell phone and I couldn’t see enough to use the net. I had to feel with my hands where the fish were. They ended up taking a ride in a plastic bag! I had promised Emmy I would get them if I could so I was dedicated to the cause! 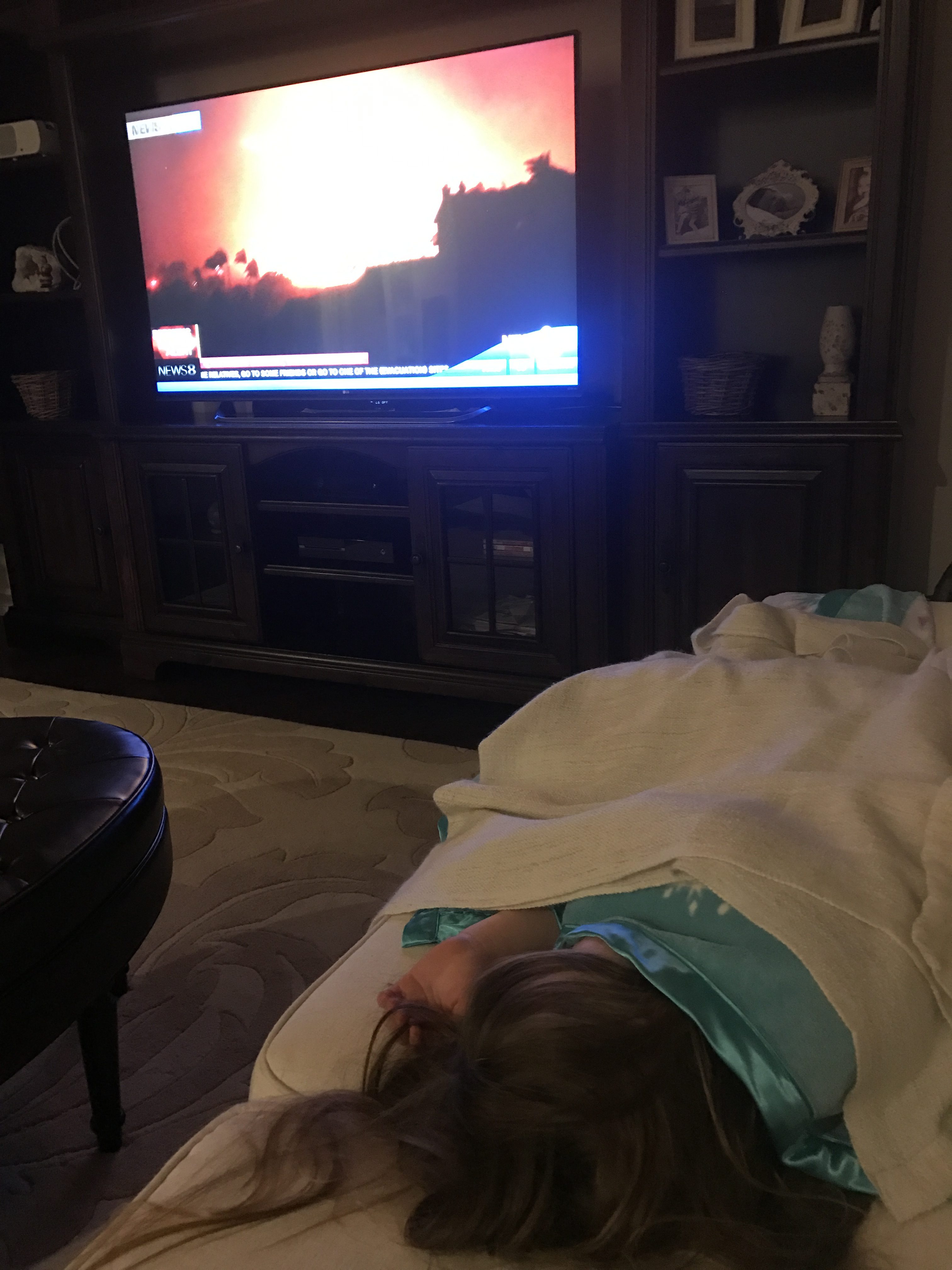 The next few days were a blur. Some people were let back into their homes, but our neighborhood was under mandatory evacuation orders until the end. We spent day and night glued to the TV looking for signs that our community was still there and we heard from a neighbor that our houses were smokey, covered in soot, but totally fine. That was a huge relief.

December continued on after this, although the holidays didn’t feel the same as years in the past. It felt hard to celebrate when so many of our friends lost their homes, horses, pets, and businesses… but the local spirit remains high. We live among some of the strongest people, and you can already see signs of rebuilding. 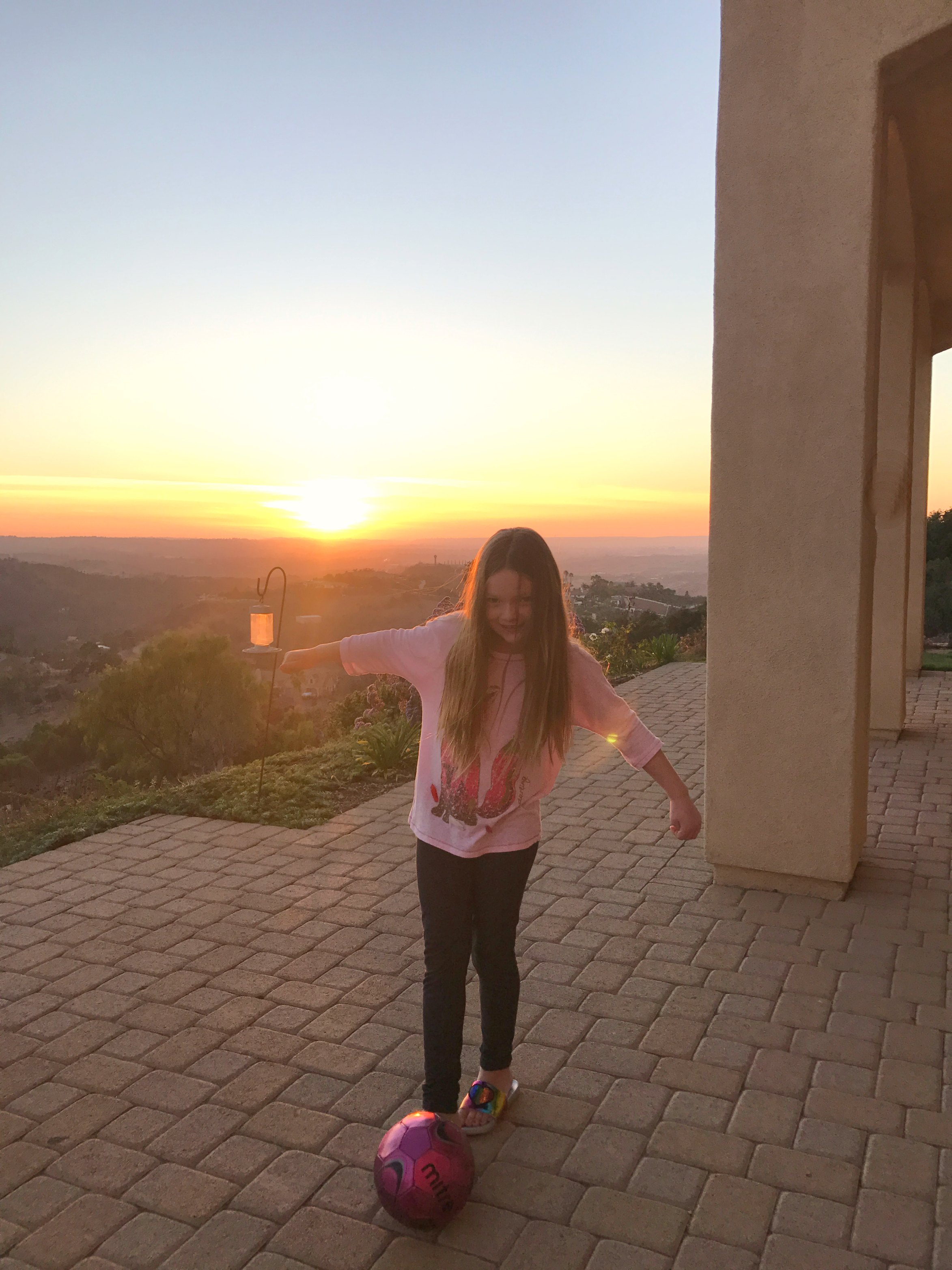 We are getting ready to go on our next adventure, and you can probably guess what I already have in our suitcase, the mifold® the Grab-and-Go Booster. There is no way we will ever travel without it. I’m hoping for a much less eventful trip, but it is good to know we can take Emmy in any car we need to because we have a travel booster with us!

I found this instructional video very helpful and I would recommend watching it before you use it: https://www.youtube.com/watch?v=lfHvzP-CPsE