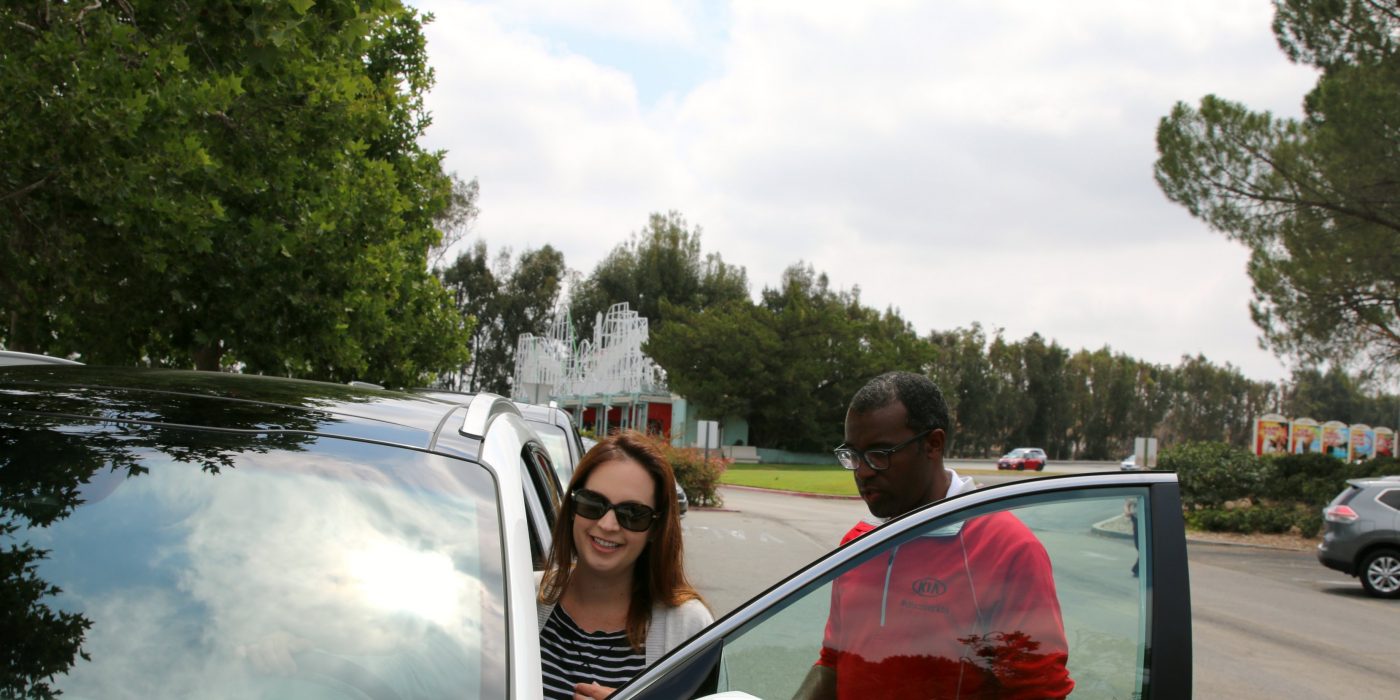 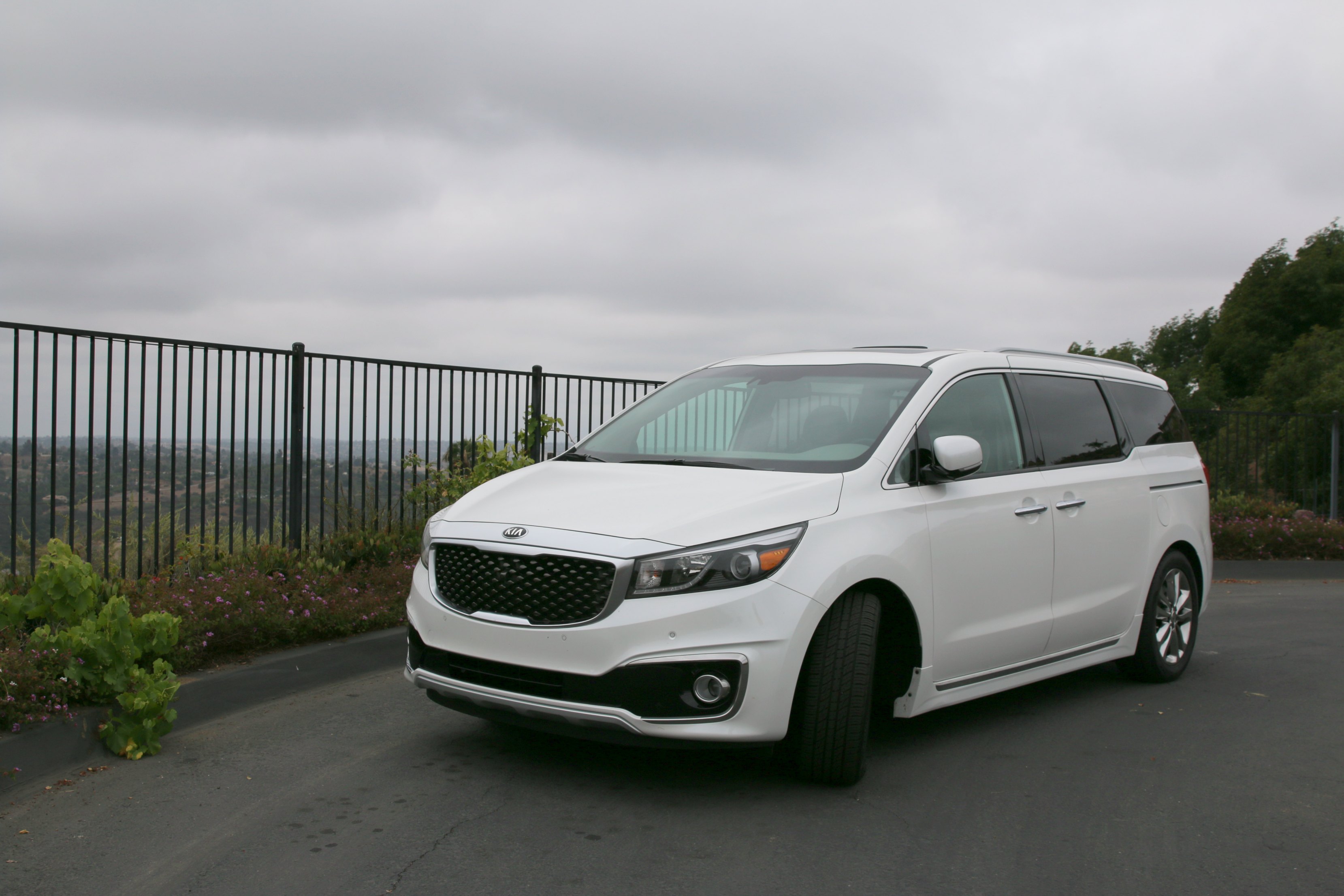 Parenting three kids with such a broad range of ages creates unique situations and some pretty awesome perks. One of which is that our older two make perfect babysitters. Long gone are the days where we have to line up a babysitter if Pete and I want to spend some time together, not that we take advantage of this nearly as often as we should, but it’s nice to know that option is there.

Last Sunday we actually did take a quick getaway. We drove up together to Six Flags Magic Mountain for the Kia Ride & Drive Event.

These events are pretty awesome and so convenient. What they do is offer park visitors a chance to experience the full line up of vehicles and take them for quick test drives. You also have a knowledgeable Kia representative there to answer all of your questions and show you all of the awesome features. 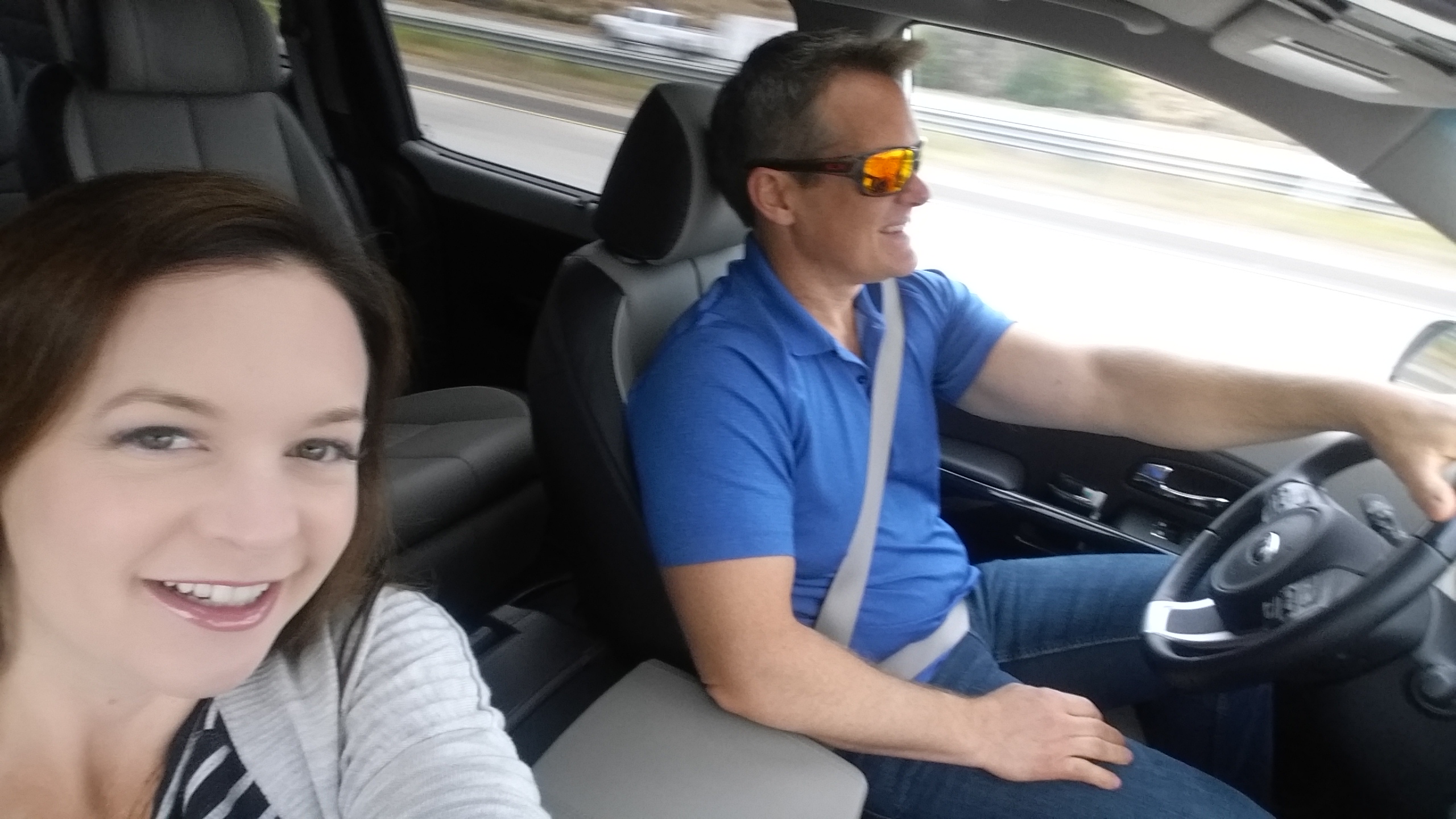 Knowing that I am one of the biggest Kia Sedona fans out there, Kia sent over a Sedona for us to drive up in and sponsored this post. Pete and I set off from our home in San Diego and about two and a half hours later we were up at Magic Mountain. 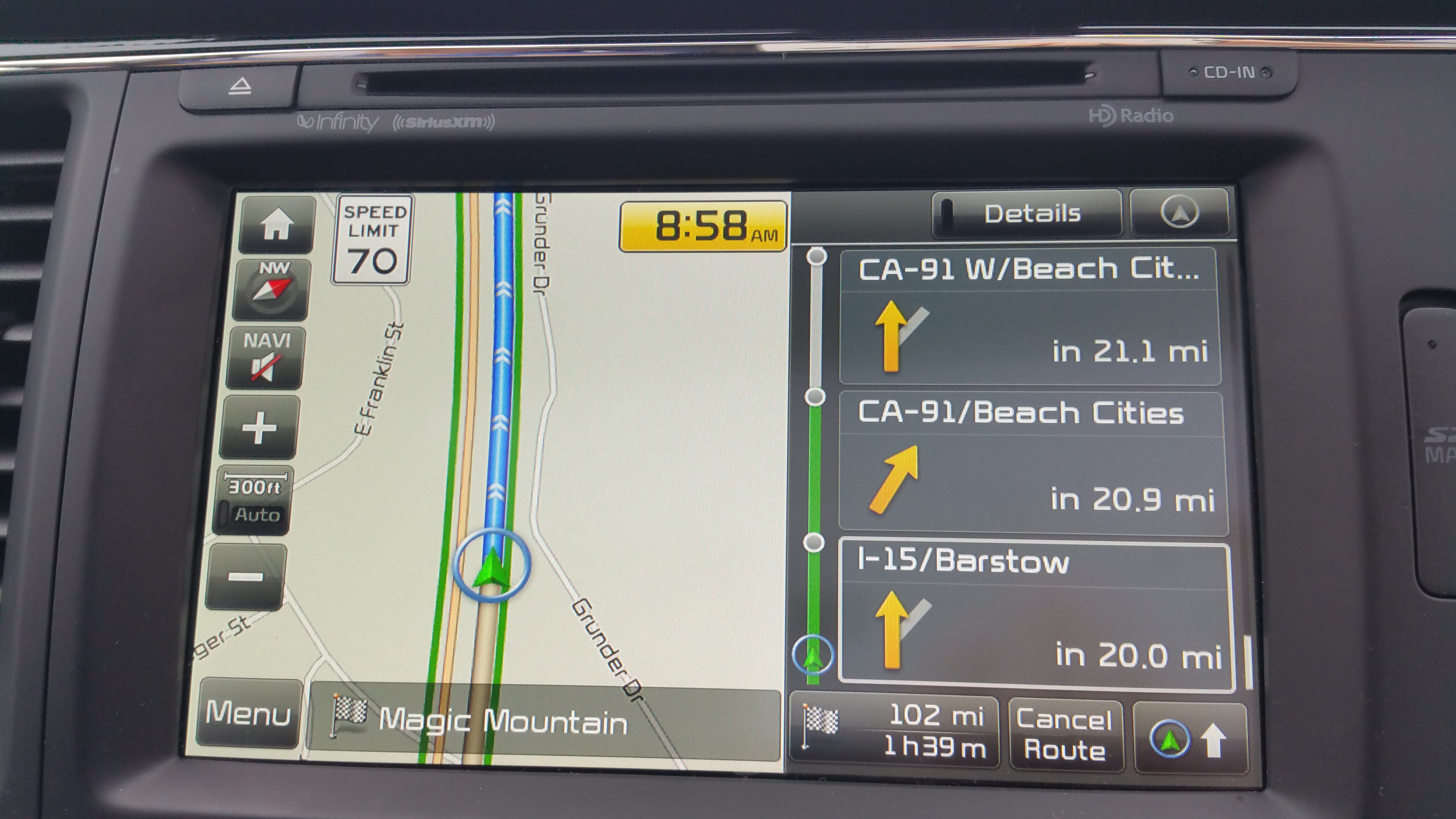 Driving the Kia Sedona made for an easy drive up… and I still love all of the features that are in the Sedona. For instance the Navigation that shows the speed limit, adaptive cruise control, and the backup camera with a 365 degree view. The kids LOVE that the middle seats recline… and I joked that I was going to nap in one of those seats on the way back from our little date. That didn’t end up happening, but aside from more dates with Pete, a nap would also be really great! 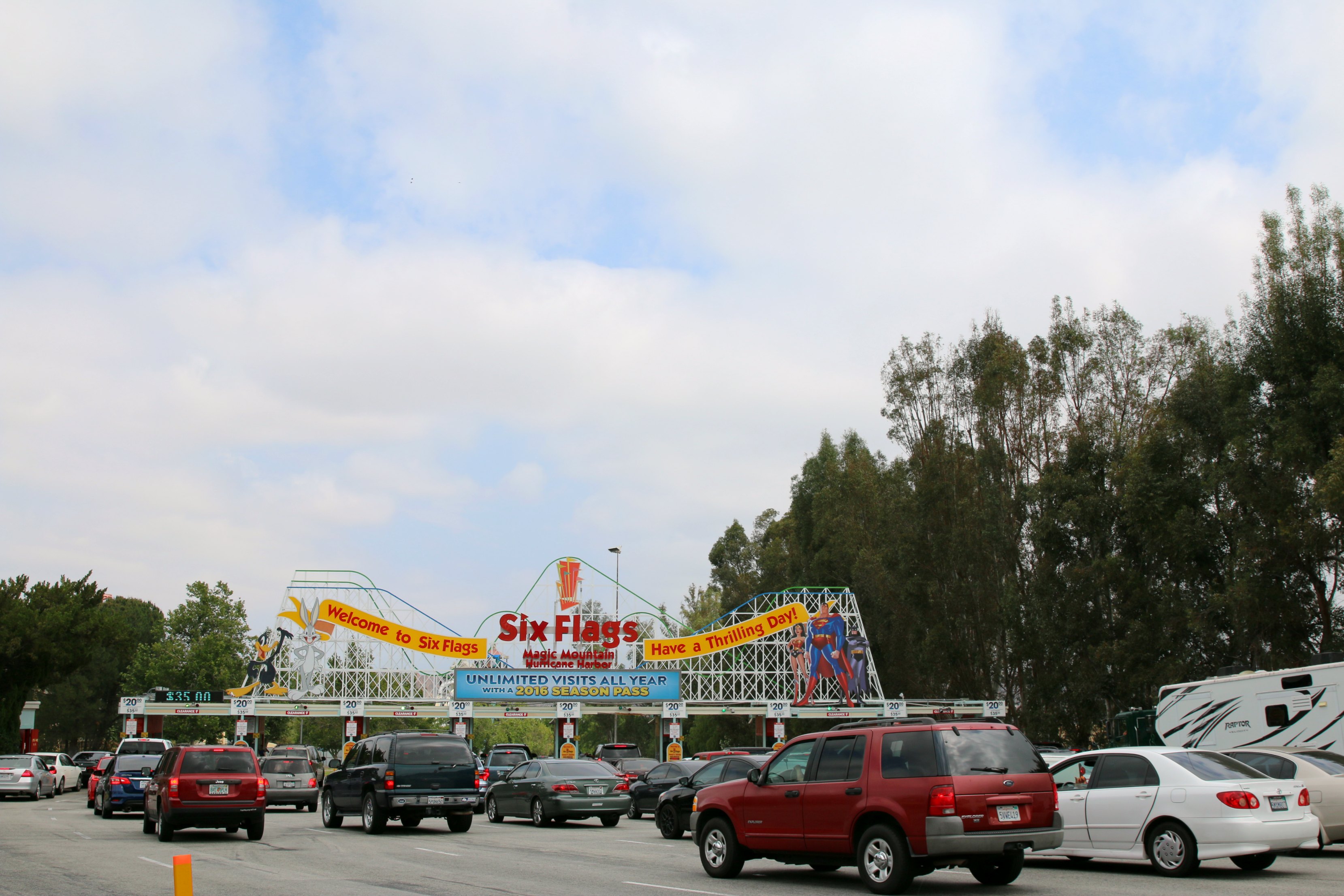 When we arrived at Six Flags, we easily saw the Kia area and there were a lot of friendly Kia people waiting to share their enthusiasm with everyone. 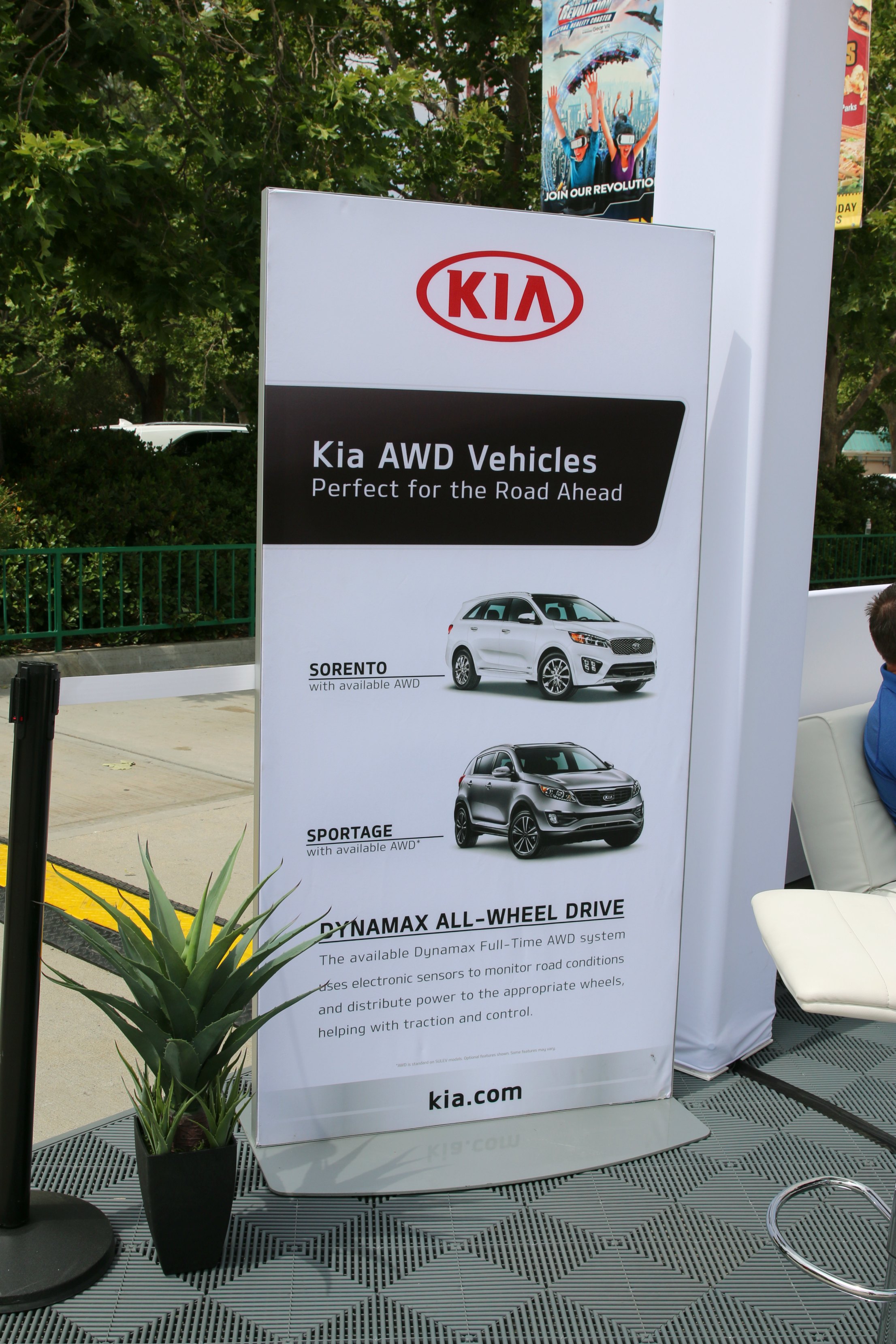 After we filled out a little bit of paperwork, and had our drivers licenses scanned, we were shown to the area to take a breathalyzer. This was a first for both of us and although I might appear long winded (ha!), I learned I’m not really, when it took two attempts to blow enough air into the devise to get our results. Pete and I joked that this was a first for both of us, and a very unique way to have a date! We obviously got the all clear and were ready to test drive some cars!  I am so glad that Kia does this. They take safety seriously in all aspects and this just solidified that again for us, plus it gave us a good laugh and that’s always a good thing! 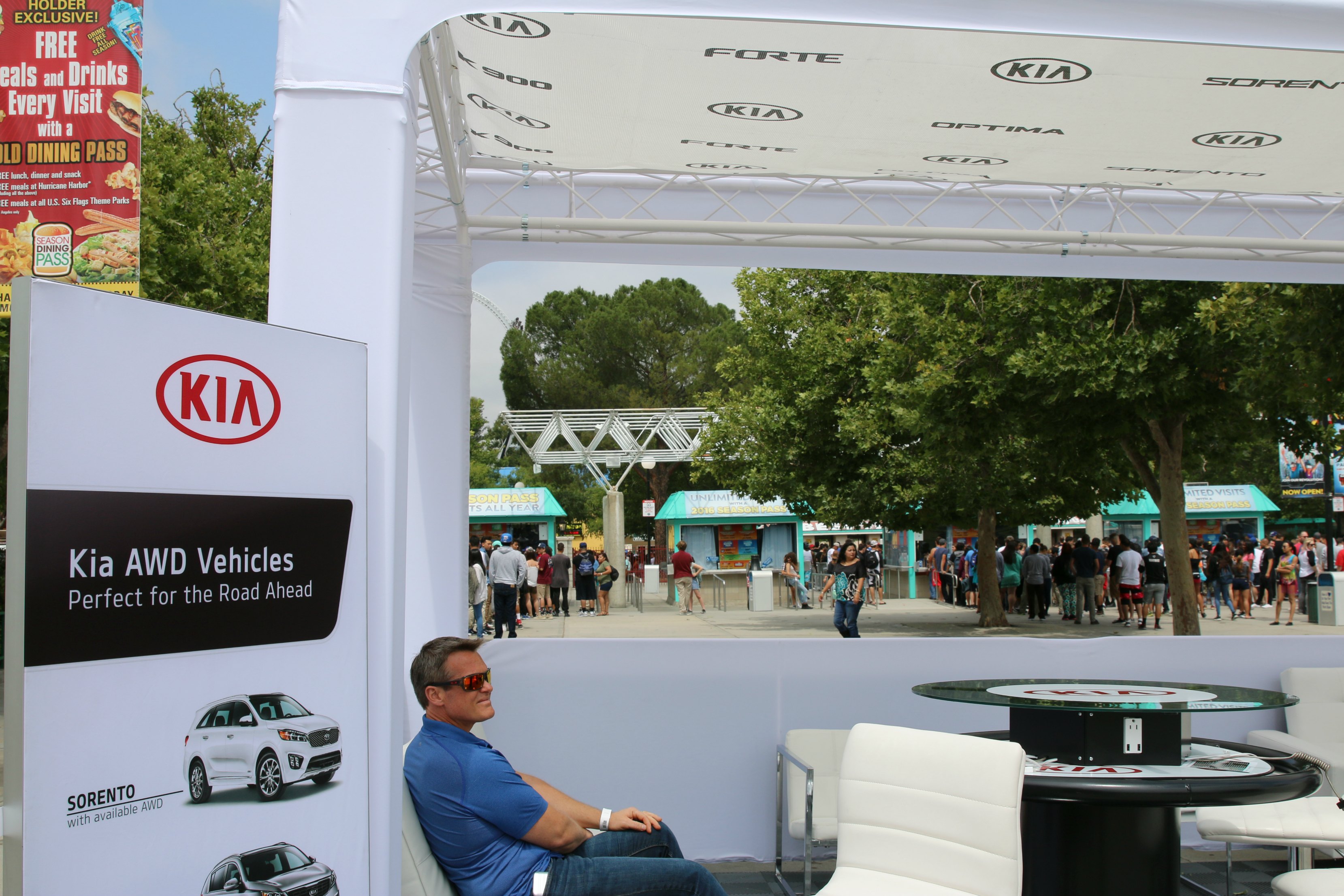 We enjoyed a cold bottle of water and then our car was waiting for us. 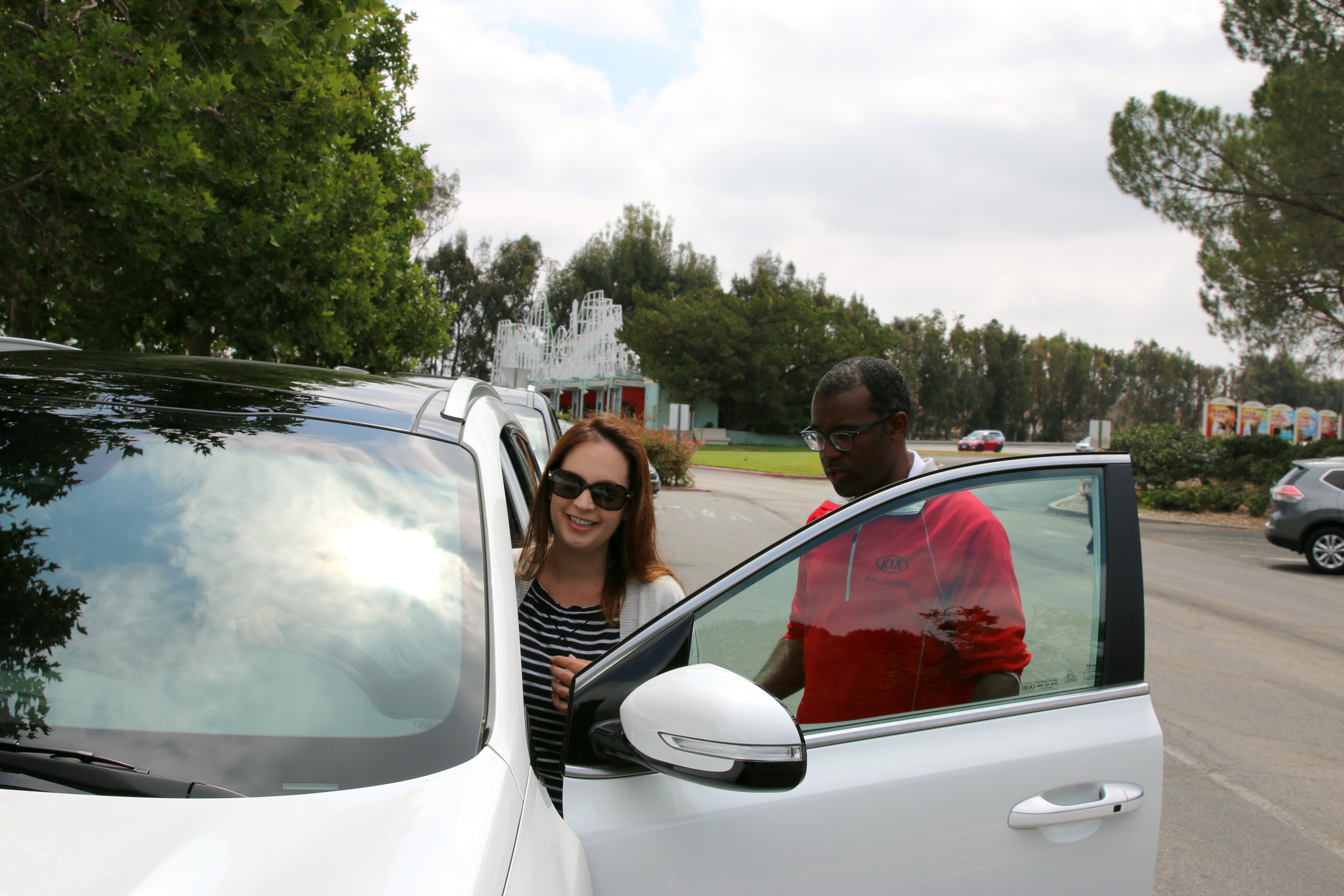 We chose two cars we haven’t driven of Kia’s before. The all new 2017 Sportage, and the Kia K900. Guess who chose which one. 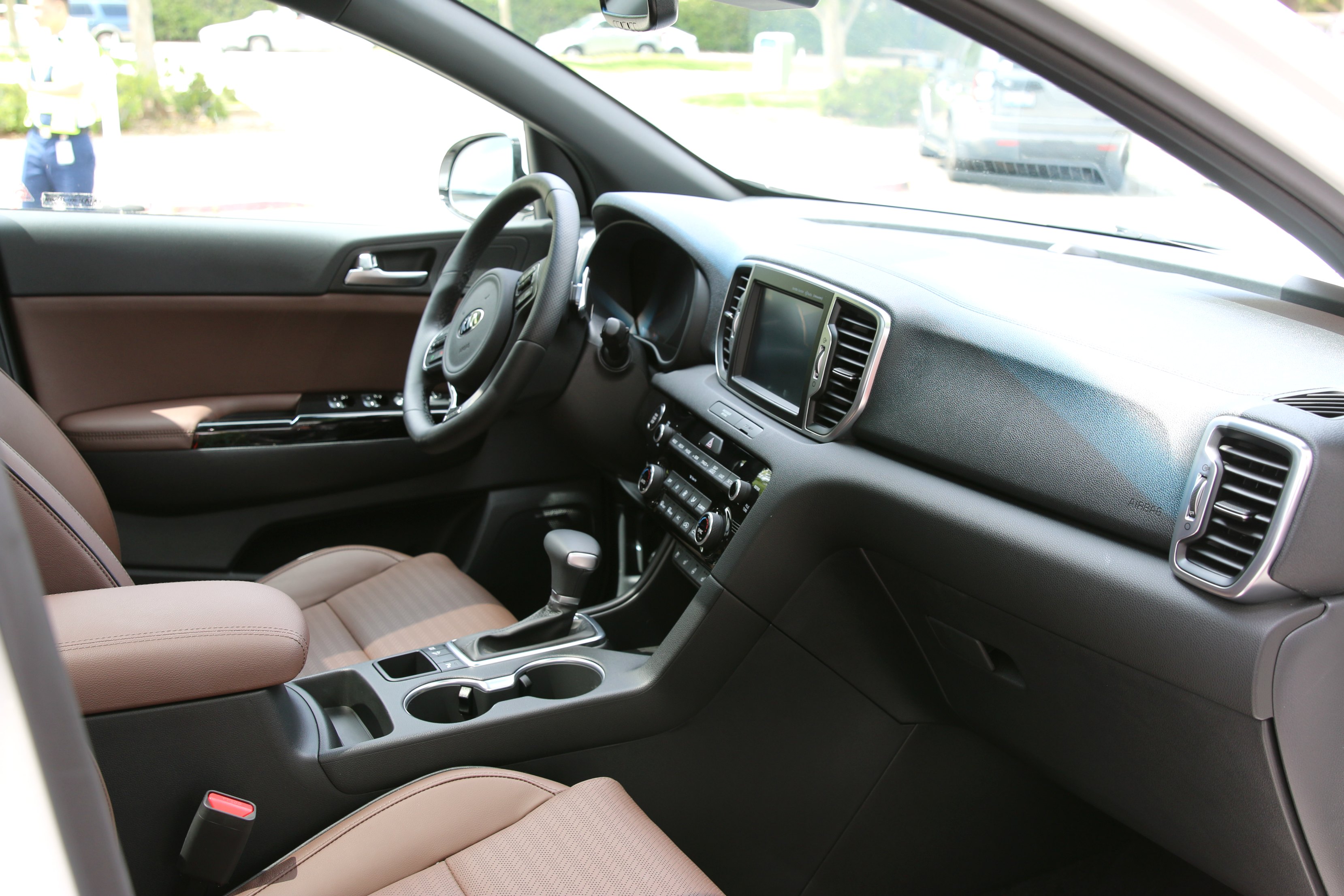 If you guessed that I would want to drive the new Sportage and Pete the K900, you are right! 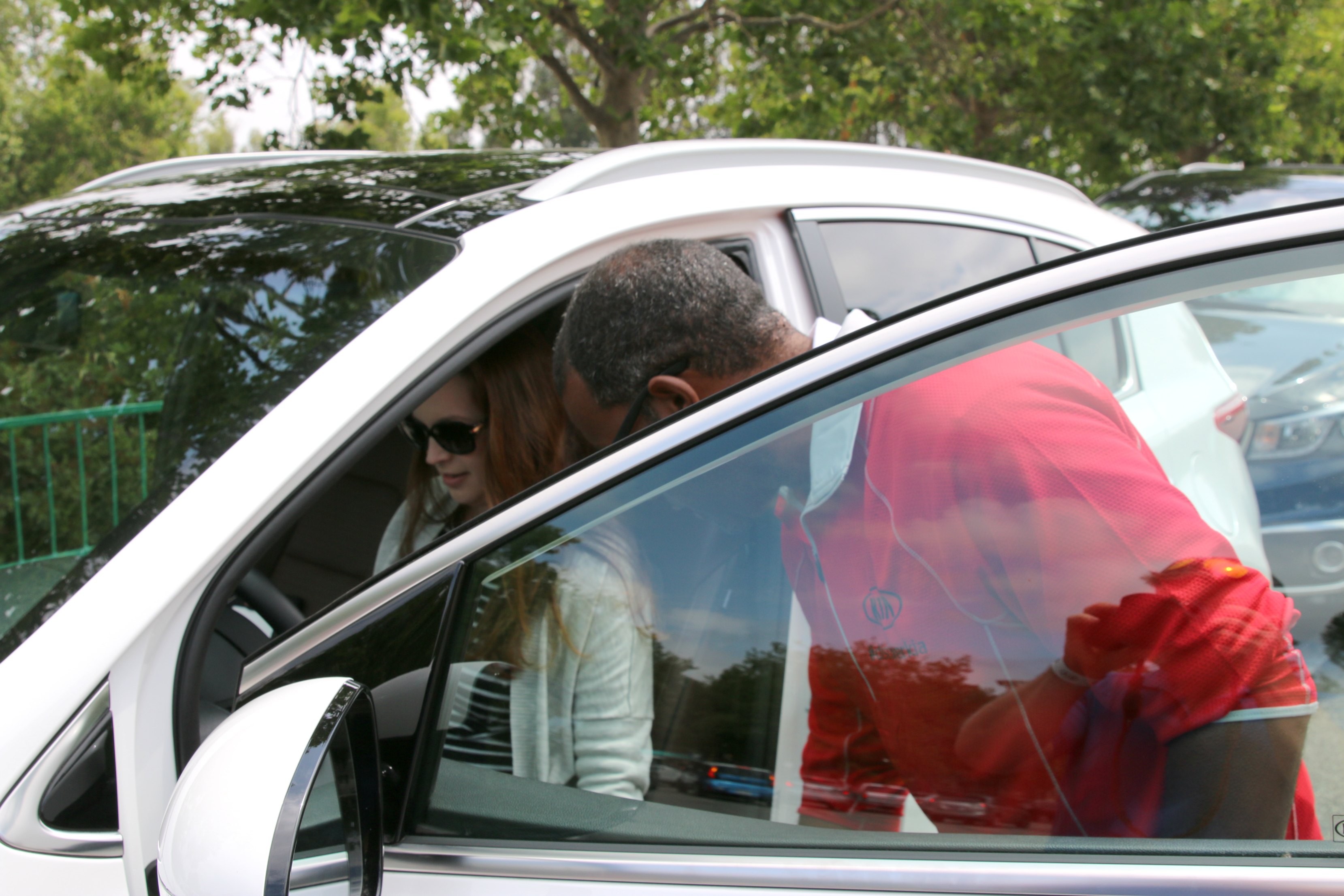 The Sportage was much bigger inside than I thought it would be.  It is probably not the best choice for someone with three kids, two of which are teens, but if that were not the case I would totally drive this car…especially with all the bells and whistles you can purchase it with. It drove awesome too. I’m vertically challenged (okay, I’m short) and  I could see out of it really well, and the power that it had was remarkable. I really enjoyed it. 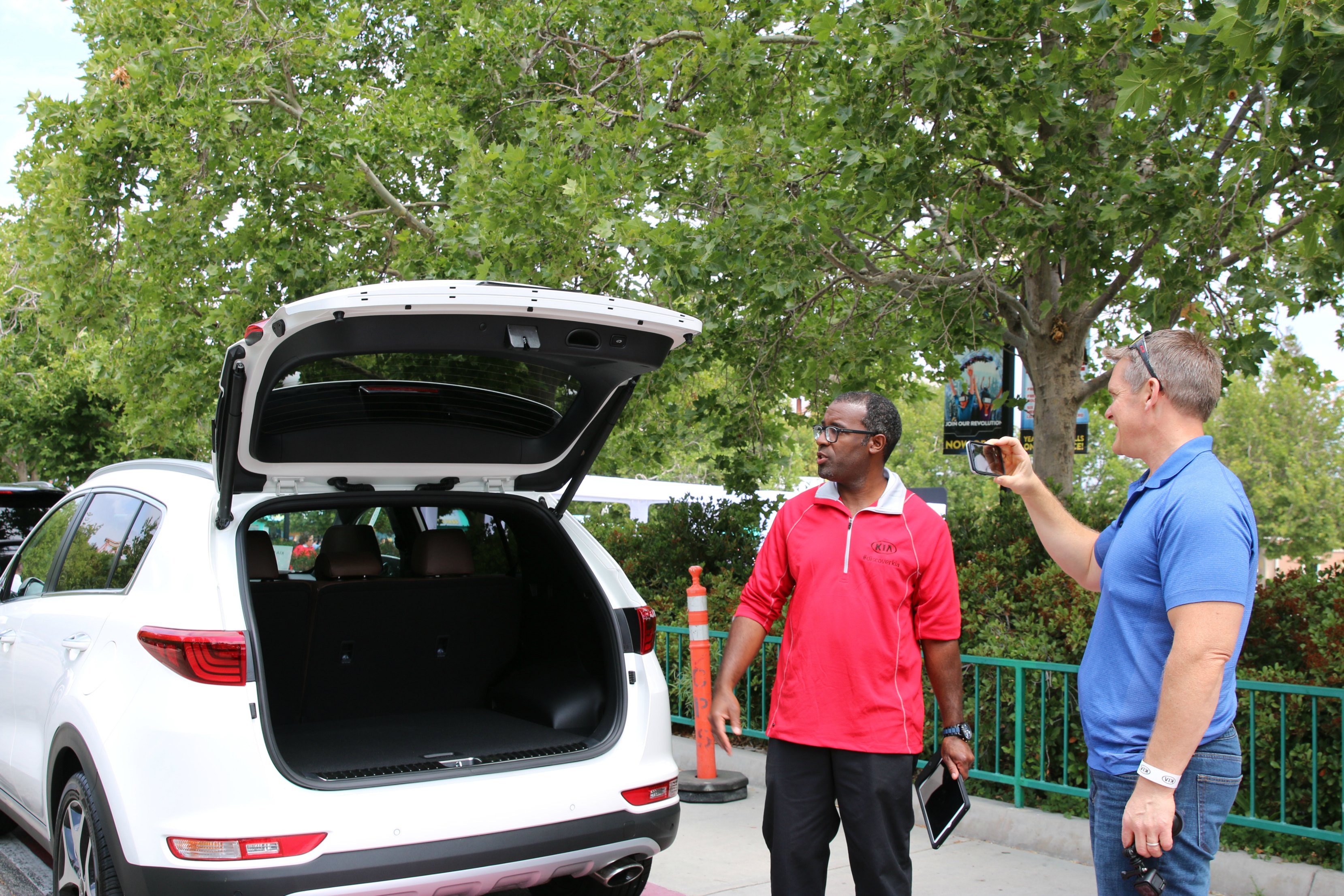 Pete was documenting it for our videos… and he was impressed at how much trunk space it had. 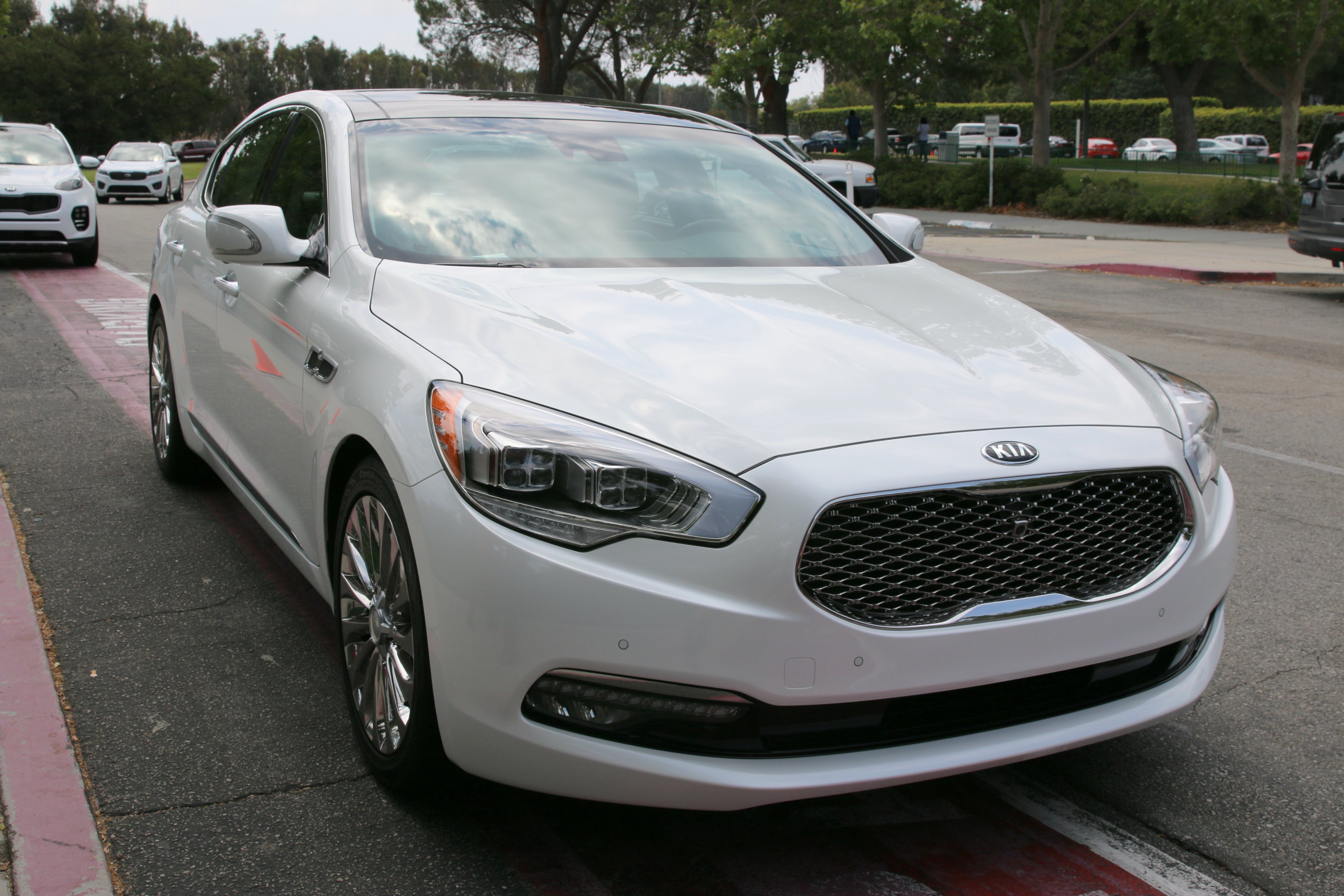 Then it was time for the K900. We are luxury car owners and Pete is an aficionado in all things luxury sedans so this was at the top of his list to drive. I wondered what he would think… and he gave it two thumbs up. Not literally because he doesn’t do the thumbs up thing, Maddie does that, but figuratively he gave it that. He really liked it. He said there was nothing lacking from it that he has in his car and that there were only added bonuses. We aren’t looking to replace his car right now, but he said it would definitely be on his list if we were. I sat in the back seat and I thought it was very nice back there. Each seat even has it’s own control system for climate and the seats even reclined back there. It felt really big and roomy too. 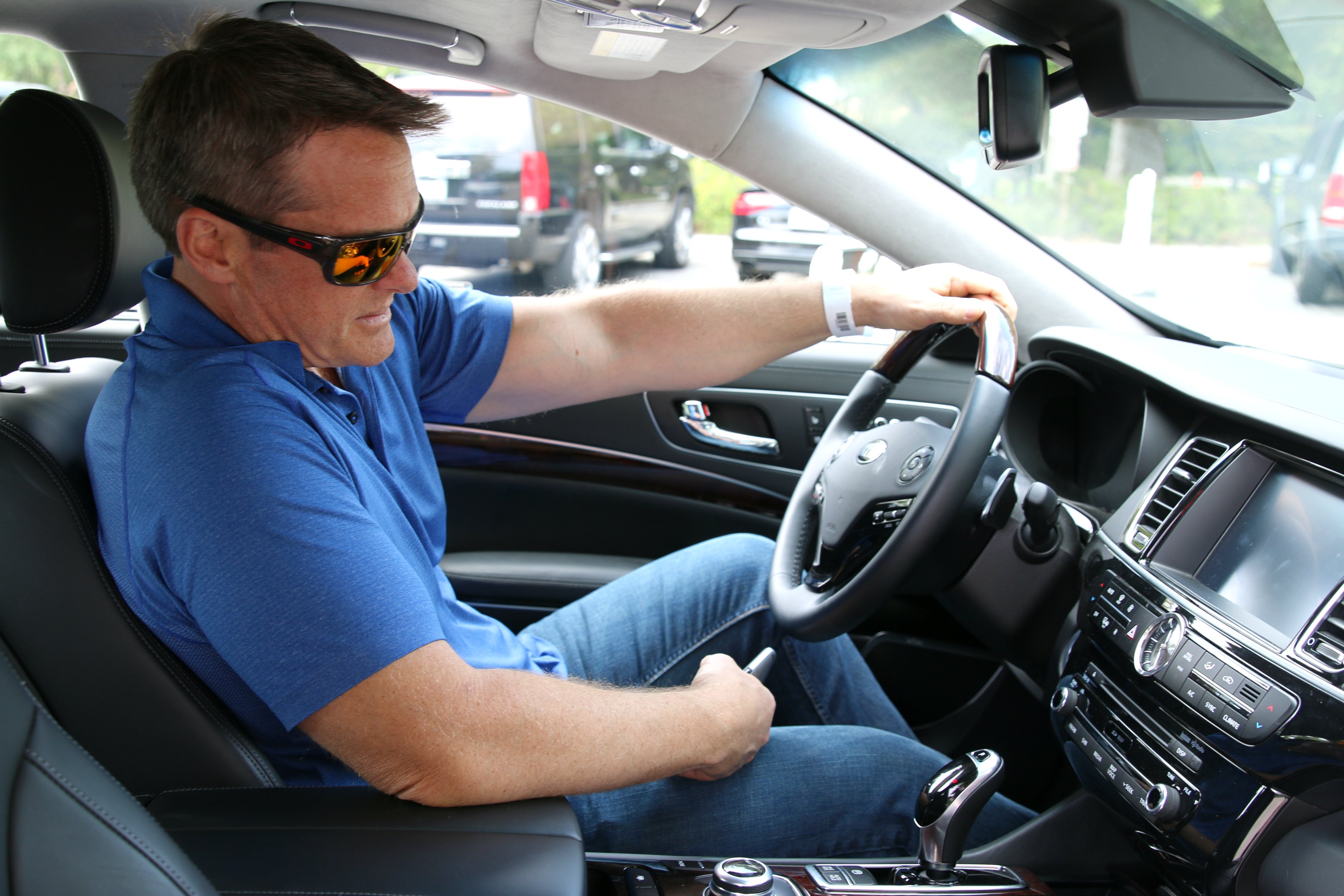 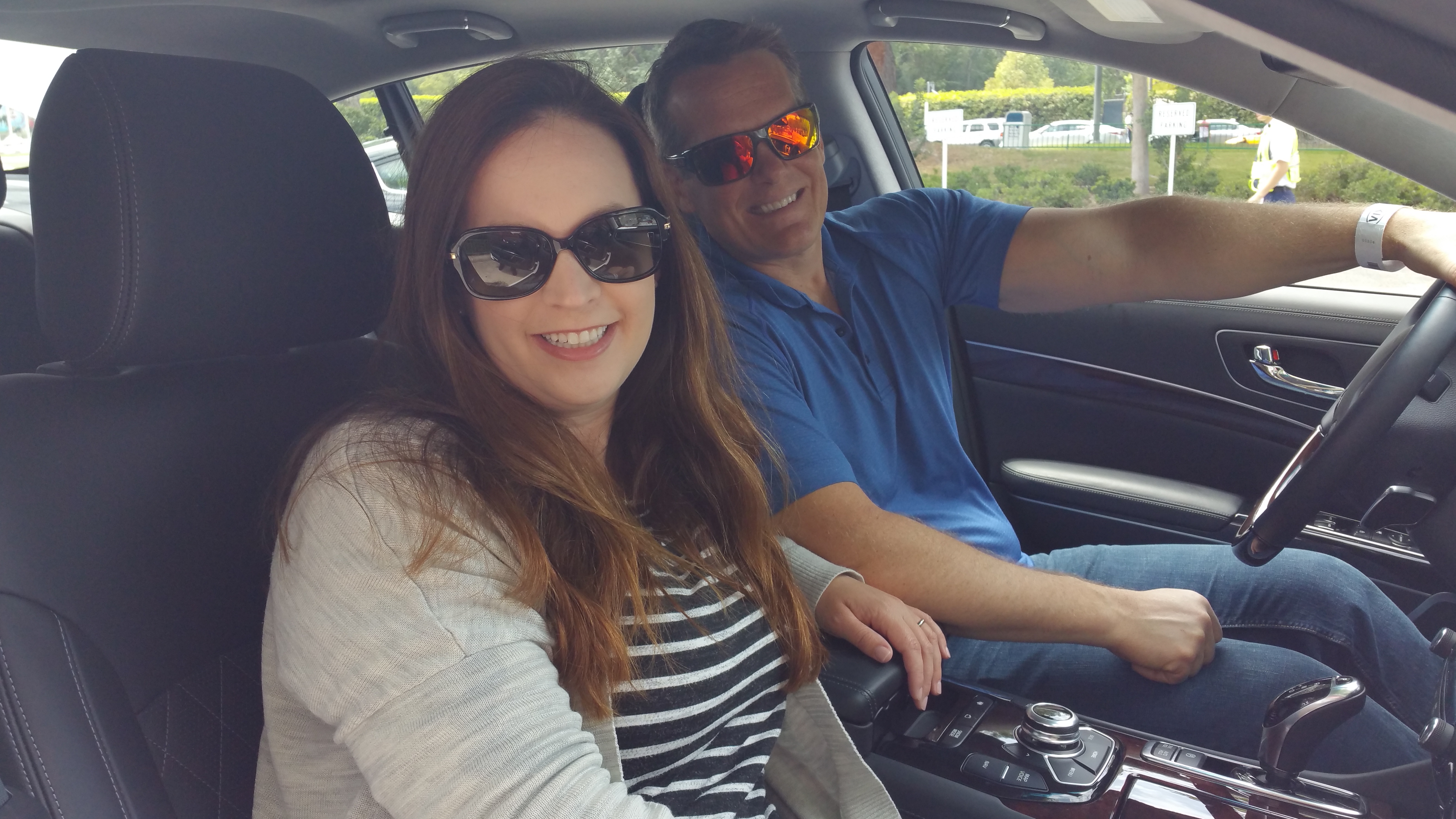 I tested out the front seat too. It was really nice. We could totally see ourselves going on a weekend getaway sans kids and driving the K900 to make it even more special. I almost forgot to mention the sound system! It might have been the best one I’ve ever heard! 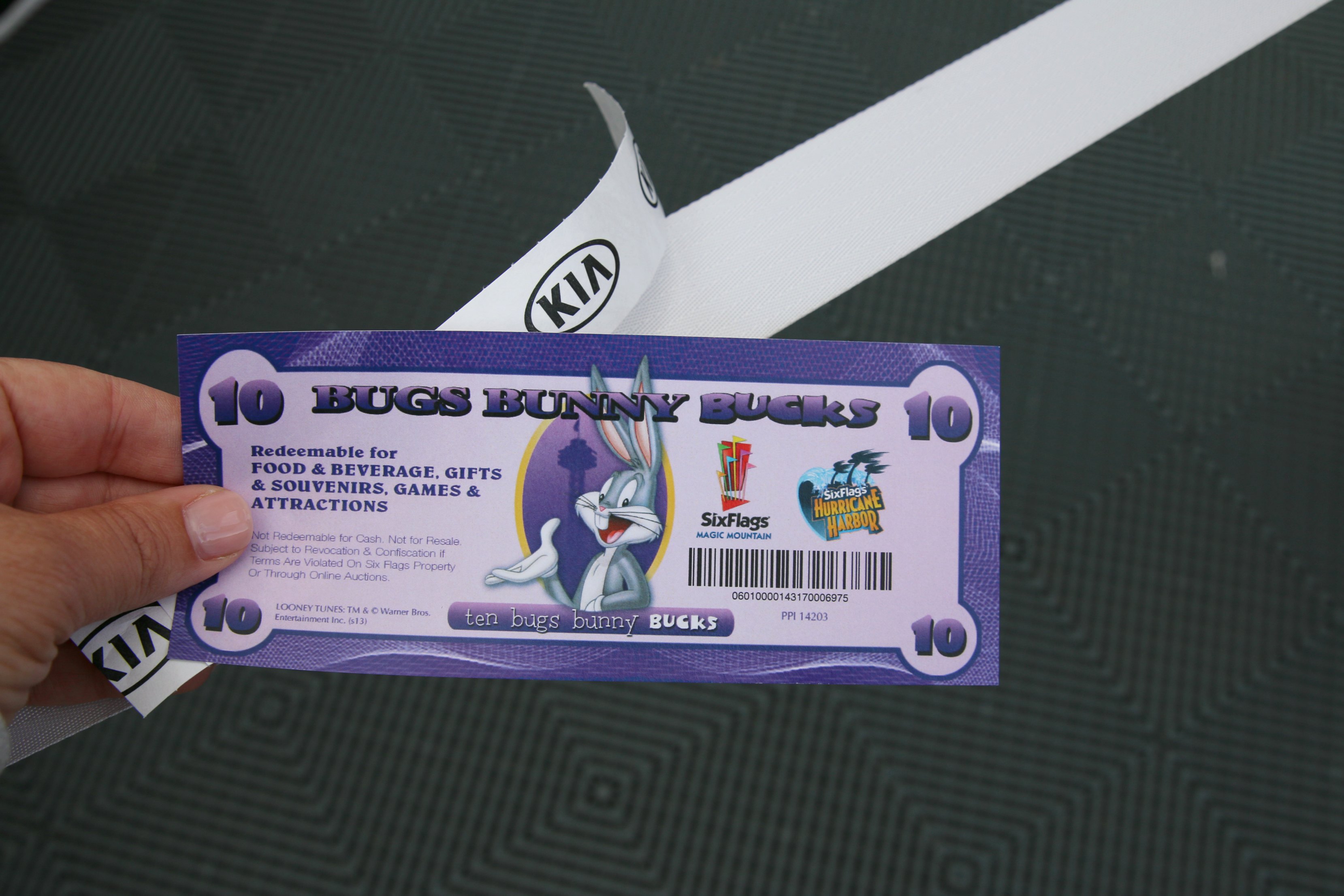 After our test drives were over, we were given $10 Bugs Bunny Bucks to use in the park. We unfortunately didn’t have time to make this a whole day date, but it sure was a nice morning together.

This was just the icing on the cake.  The best part of the Kia Ride & Drive events are how easy they make test driving the cars. They had the full fleet for you to experience. I saw how impressed people where that had never been in a Kia before. If you haven’t been in a Kia recently, prepare to be impressed!

Here is a video of our Kia Ride & Drive:

There will be more Ride and Drive events happening at other Six Flags so be sure to take advantage of them when they come to your area.

Have you driven a Kia lately?