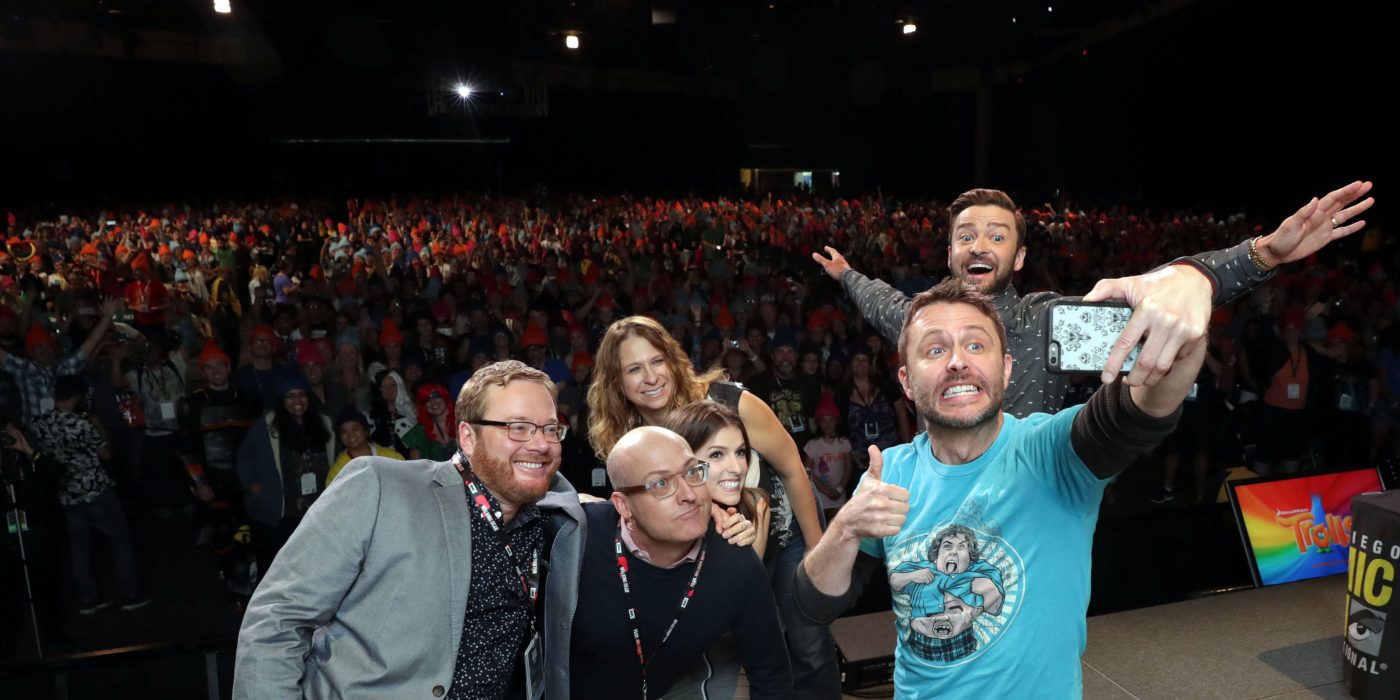 A couple of weeks ago I was invited to represent It’s A Lovely Life at a press roundtable and panel for Dreamworks’ Trolls at San Diego Comic-Con. I’ve always loved being involved in my mom’s work, and as much as we all contribute to this site, this was my first solo assignment… and I was so excited!

From the creators of Shrek comes the most smart, funny, irreverent animated comedy of the year, DreamWorks’ Trolls.  This holiday season, enter a colorful, wondrous world populated by hilariously unforgettable characters and discover the story of the overly optimistic Trolls, with a constant song on their lips, and the comically pessimistic Bergens, who are only happy when they have trolls in their stomach.  Featuring original music from Justin Timberlake, and soon-to-be classic mash-ups of songs from other popular artists, the film stars the voice talents of Anna Kendrick, Justin Timberlake, Russell Brand, James Corden, Kunal Nayyar, Ron Funches, Icona Pop, Gwen Stefani, and many more.

DreamWorks’ TROLLS is a fresh, broad comedy filled with music, and heart and hair-raising adventures.  In November of 2016, nothing can prepare you for our new Troll world.

We started the day bright and early, and made our way over to Hall H for the Trolls panel. Now, Hall H is touted as having the longest line at Comic Con, and it certainly does. People line up overnight for most panels to even get a chance of seeing one! Fortunately for us, we had reserved seating. 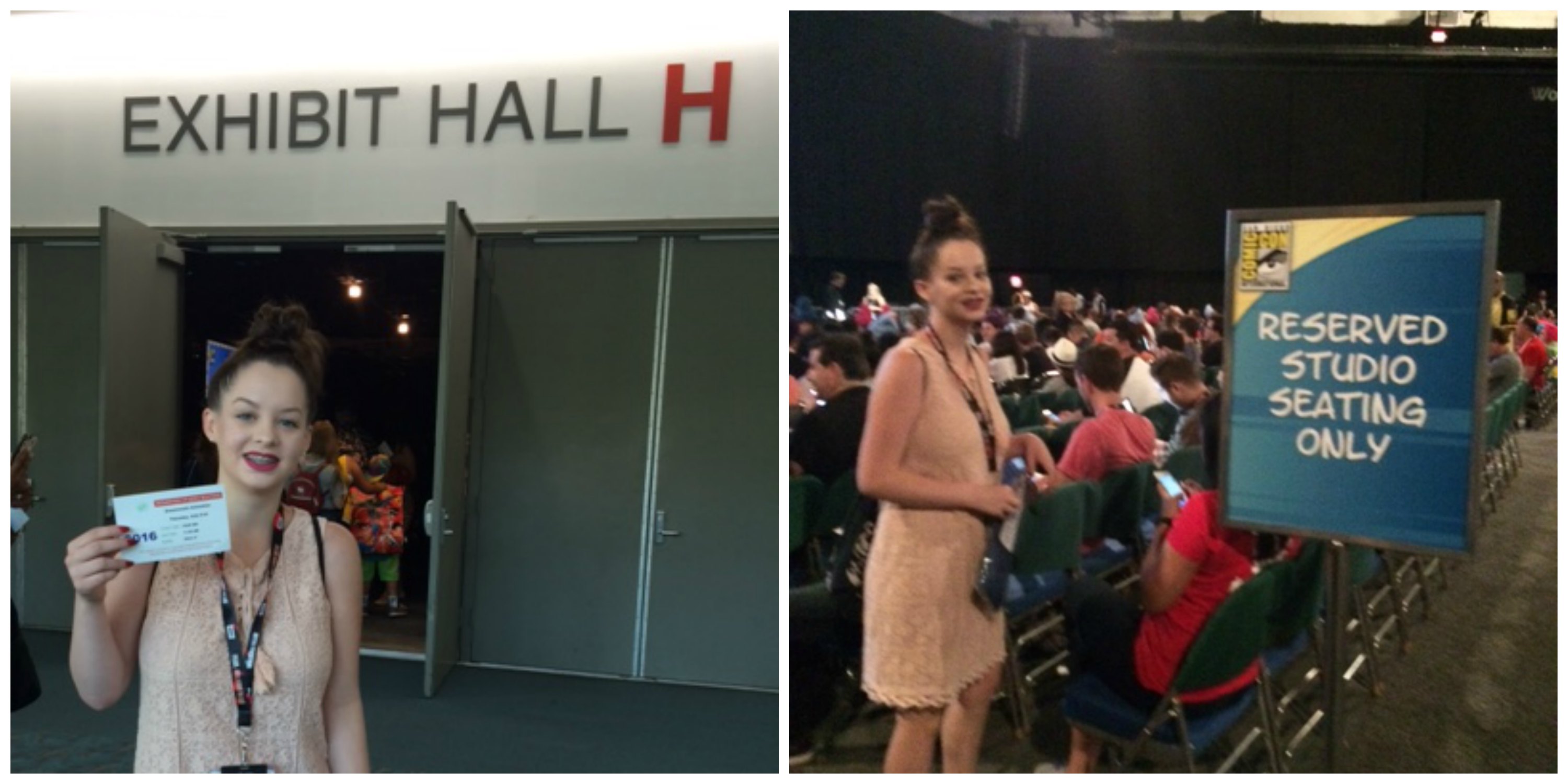 Chris Hardwick, our moderator, came out and thanked everyone for coming. Then he announced the featured guests: director Mike Mitchell, co-director Walt Dohrn, producer Gina Shay, Justin Timberlake (who plays Branch), and Anna Kendrick in the role of Poppy. 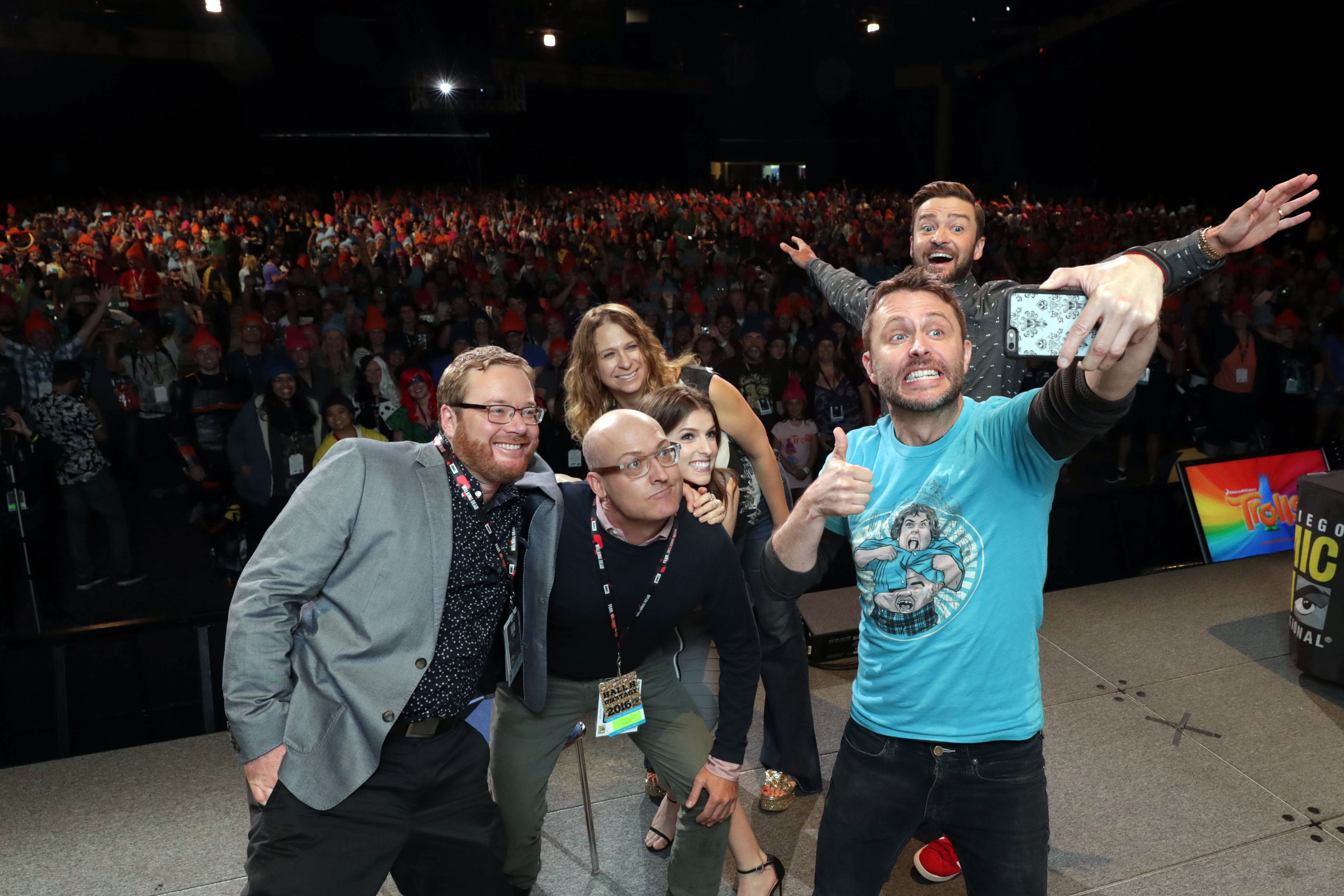 We were treated to exclusive clips from the movie, including this one below. Doesn’t this movie look awesome?!

Shortly afterward, it was announced that we would be attending a surprise panel for another Dreamworks movie: The Boss Baby! The Boss Baby stars Alec Baldwin in the titular role of the Boss Baby himself. Other guests of the panel were Tom McGrath (the director), and Ramsey Ann Naito (the producer).  The Boss Baby also stars Steve Buscemi, Jimmy Kimmel, Lisa Kudrow, Patton Oswalt, and Miles Bakshi.

DreamWorks Animation and the director of Madagascar invite you to meet a most unusual baby. He wears a suit, speaks with the voice and wit of Alec Baldwin, and stars in the animated comedy, DreamWorks’ The Boss Baby. The Boss Baby is a hilariously universal story about how a new baby’s arrival impacts a family, told from the point of view of a delightfully unreliable narrator, a wildly imaginative 7 year old named Tim. It is written by Michael McCullers and  based on a book by Marla Frazee. With a sly, heart-filled message about the importance of family, DreamWorks’ The Boss Baby is an authentic and broadly appealing original comedy for all ages.

We were also treated to exclusive clips from The Boss Baby and they are hilarious! I know my mom is going to love this movie and we are planning to see it together and then again with the rest of the family!

Later that day we headed back to “base camp” to prepare for our roundtables with the panel members from Trolls and The Boss Baby. 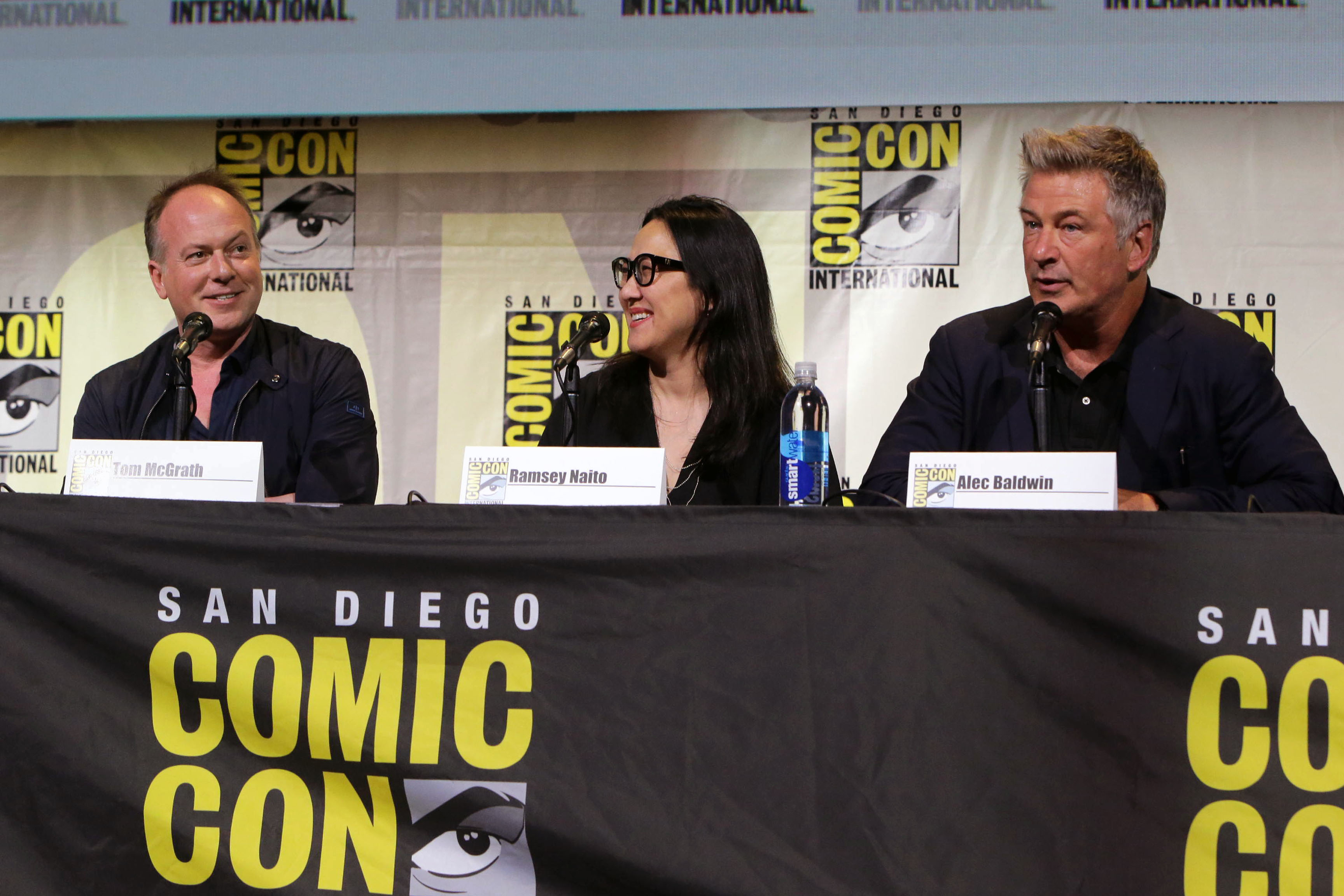 The Boss Baby panel members went first. Alec Baldwin was hilarious and very intelligent, and it was super cool to hear about the process of making The Boss Baby from the very beginning from Tom McGrath and Ramsey Ann Naito.

The Boss Baby is based on the relationship between older and younger siblings, which is something I totally relate to! No matter how hard it can get to deal with my sisters, I still love them all the same!

Tom said that when he originally thought of a person (before the casting process had even started) to play the role of The Boss Baby, he immediately thought of Alec Baldwin. In my opinion, he definitely made the right choice.

After the roundtable, we all took a group photo! 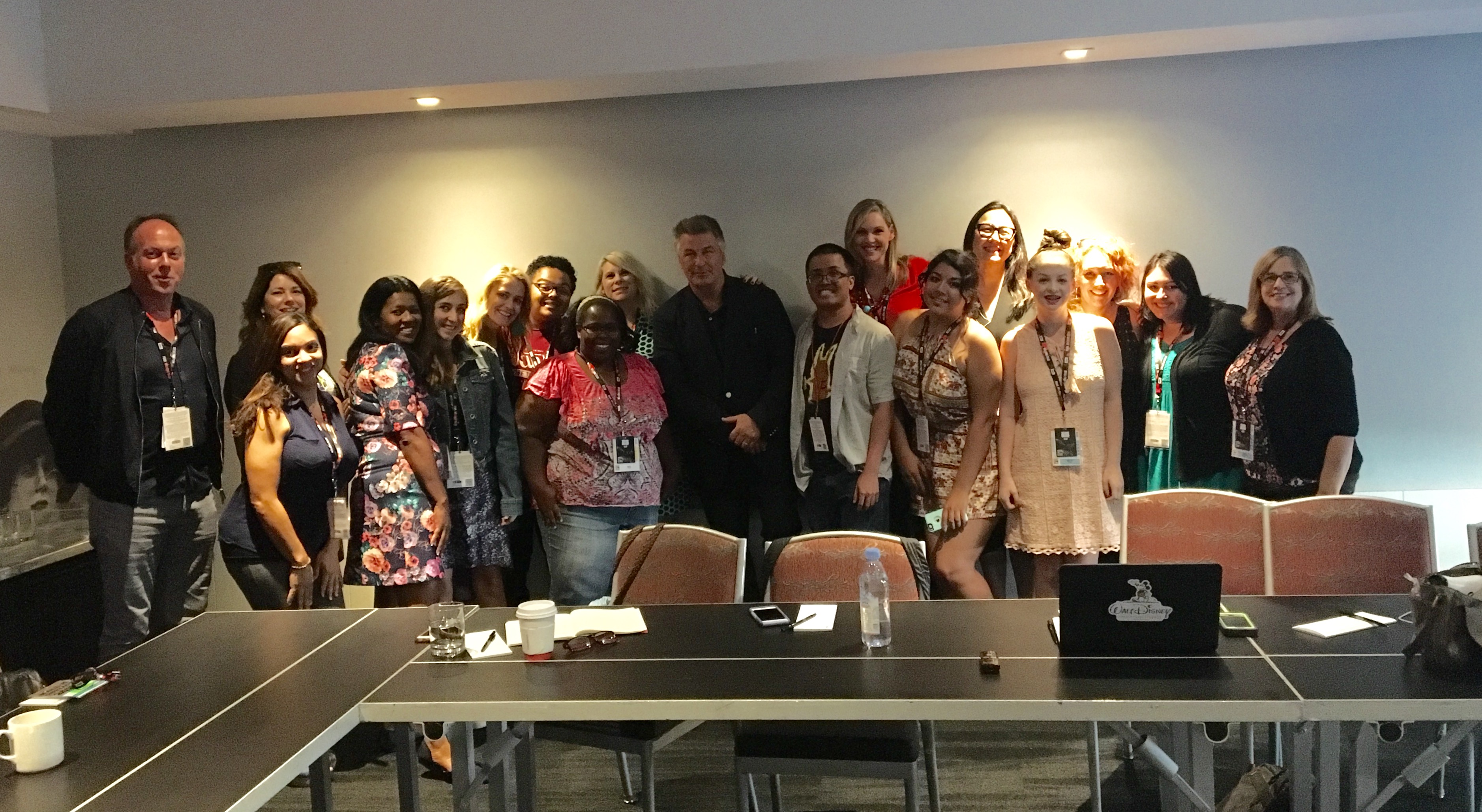 Next up was a roundtable with the cast of Trolls. This was a cast of incredibly funny people with such great chemistry and love for what they do. They also talked quite a bit about the full process of making the movie. Walt Dohrn has been a part of the project for three years, while Gina Shay has been working on it for five! A preliminary script for the movie was worked on for two years, but was scrapped in favor of the one that actually came to fruition.

A big part of Trolls is its soundtrack, and with both Justin Timberlake and Anna Kendrick (as well as many other big musical names, including Gwen Stefani and Icona Pop), that’s kind of a given. The panel members talked about how cohesiveness in the soundtrack was very important to them, and the musical numbers in the clips we were shown, as well as at the roundtable (Justin sang part of a Madonna song for us) were fantastic and really fit with the movie!

Then we took another group photo! 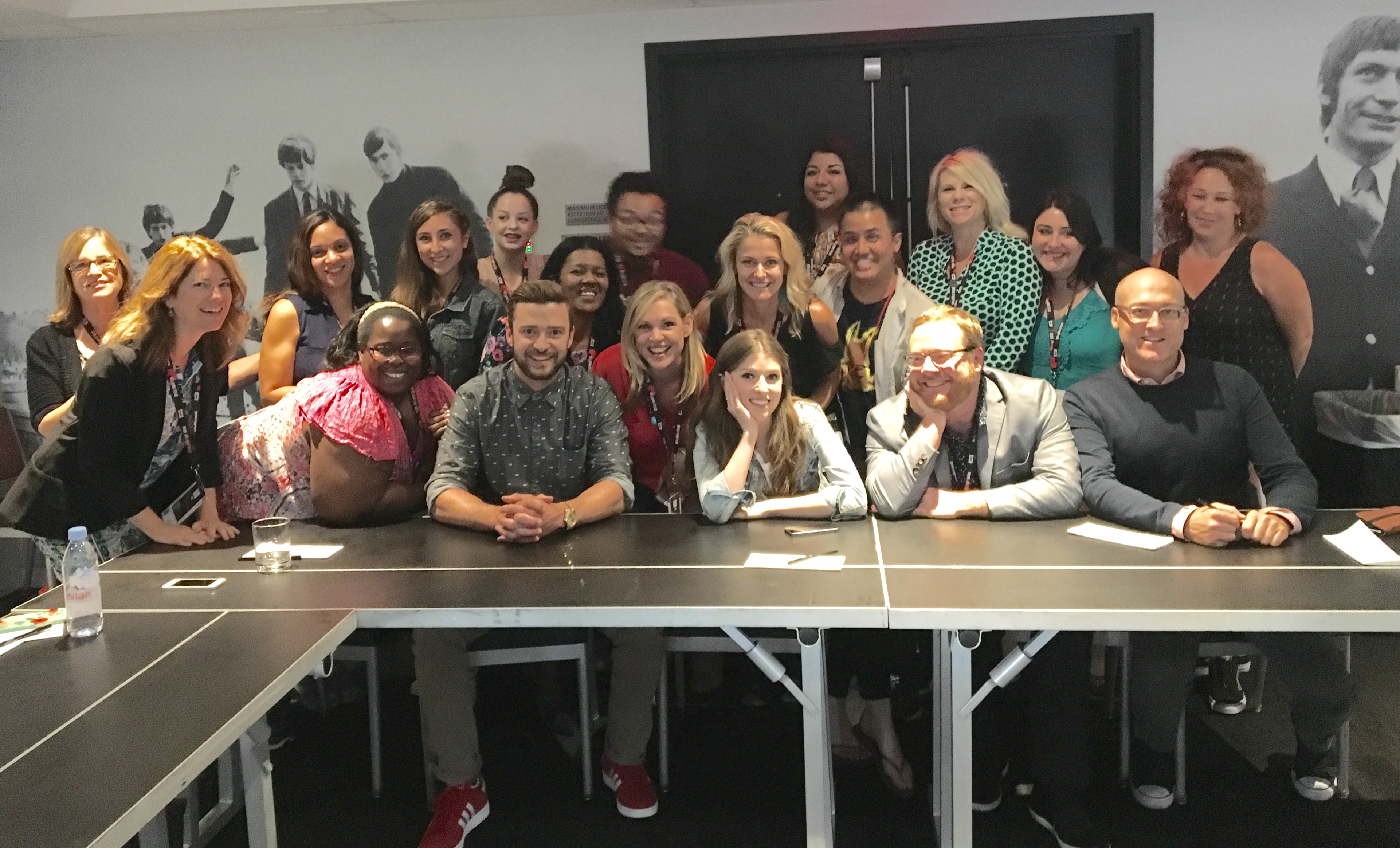 I had such a fantastic time at this event, and I hope you all check out Trolls on November 4th 2016, and The Boss Baby on March 31st, 2017! I know I’ll be there with the rest of my family! I can’t wait for my parents and little sisters to see them both!

Are you looking forward to seeing these movies too?