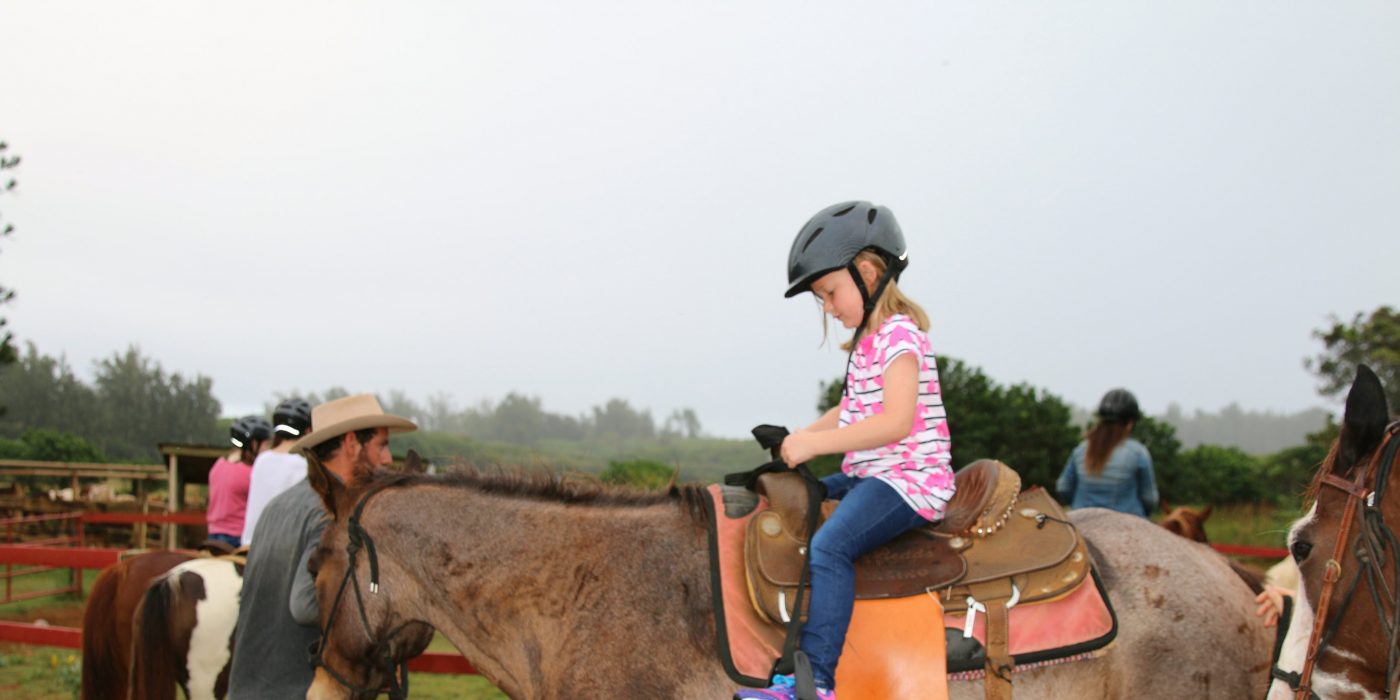 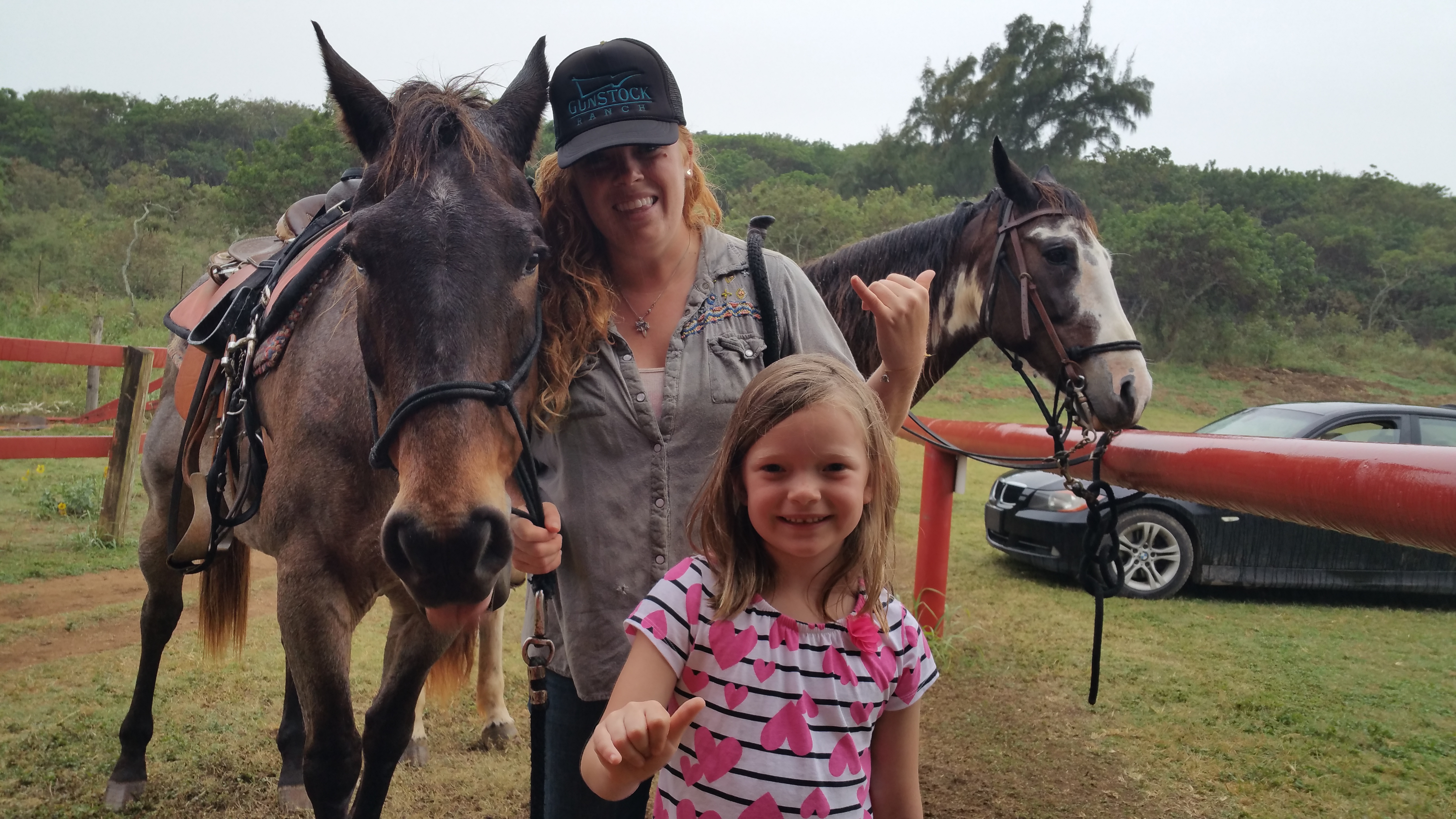 Hawaii was a lot of firsts for us.

It was the first time Pete and the girls had been there and it was also the first time Pete ever rode a horse. The girls and I have gone riding many times and taken lessons, but never in such a beautiful place… and the scenery really does make a difference! This was by far our favorite ride ever! 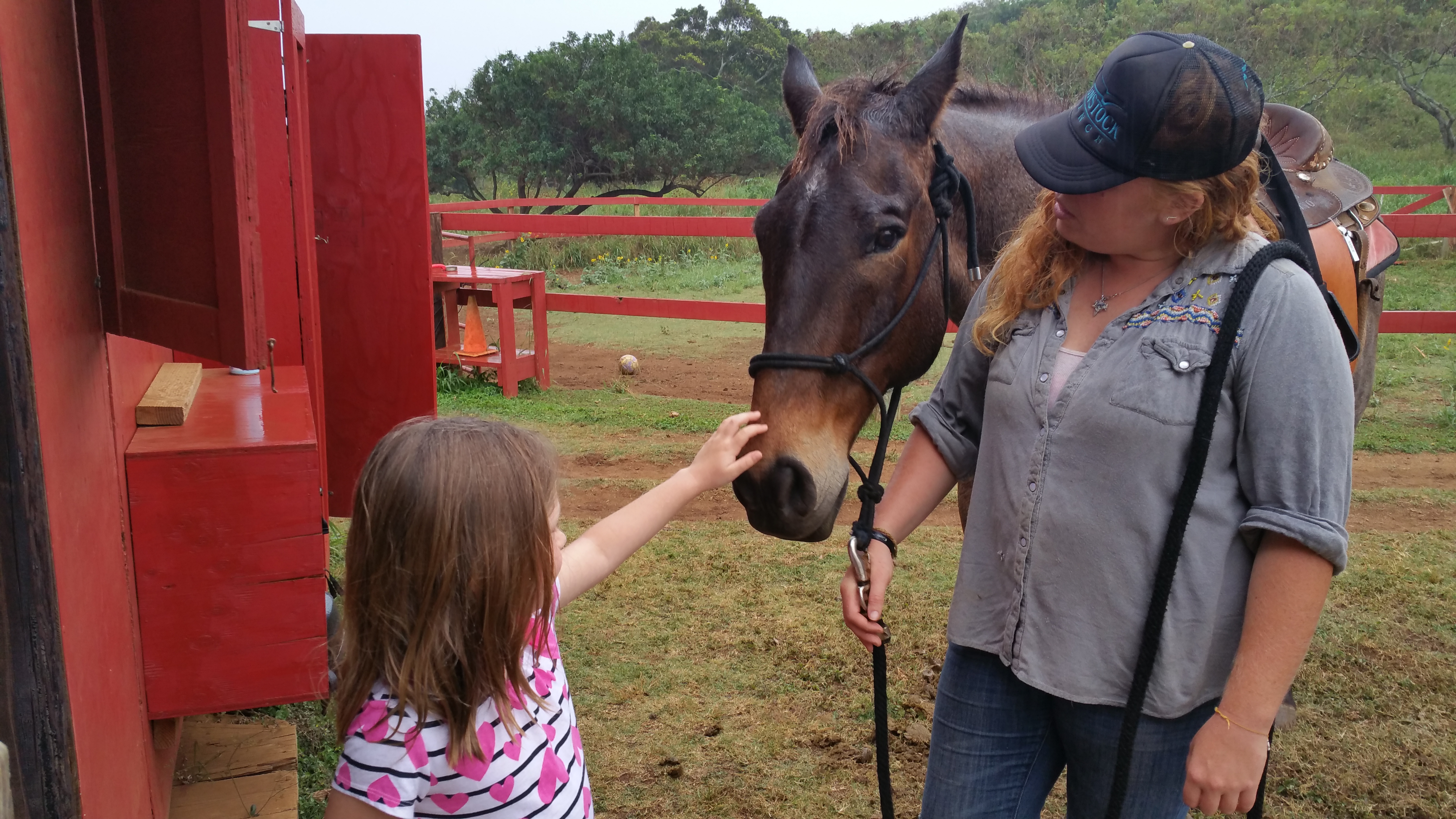 Since Emmy is still little, we wanted to ride at a place that had programs for both adults/teens and little ones too. I know that we are among great company of other families that have all aged children so it’s great to find activities that for the whole family and activities that cater to families and multi generational travelers.

Gunstock Ranch was the perfect fit for us. 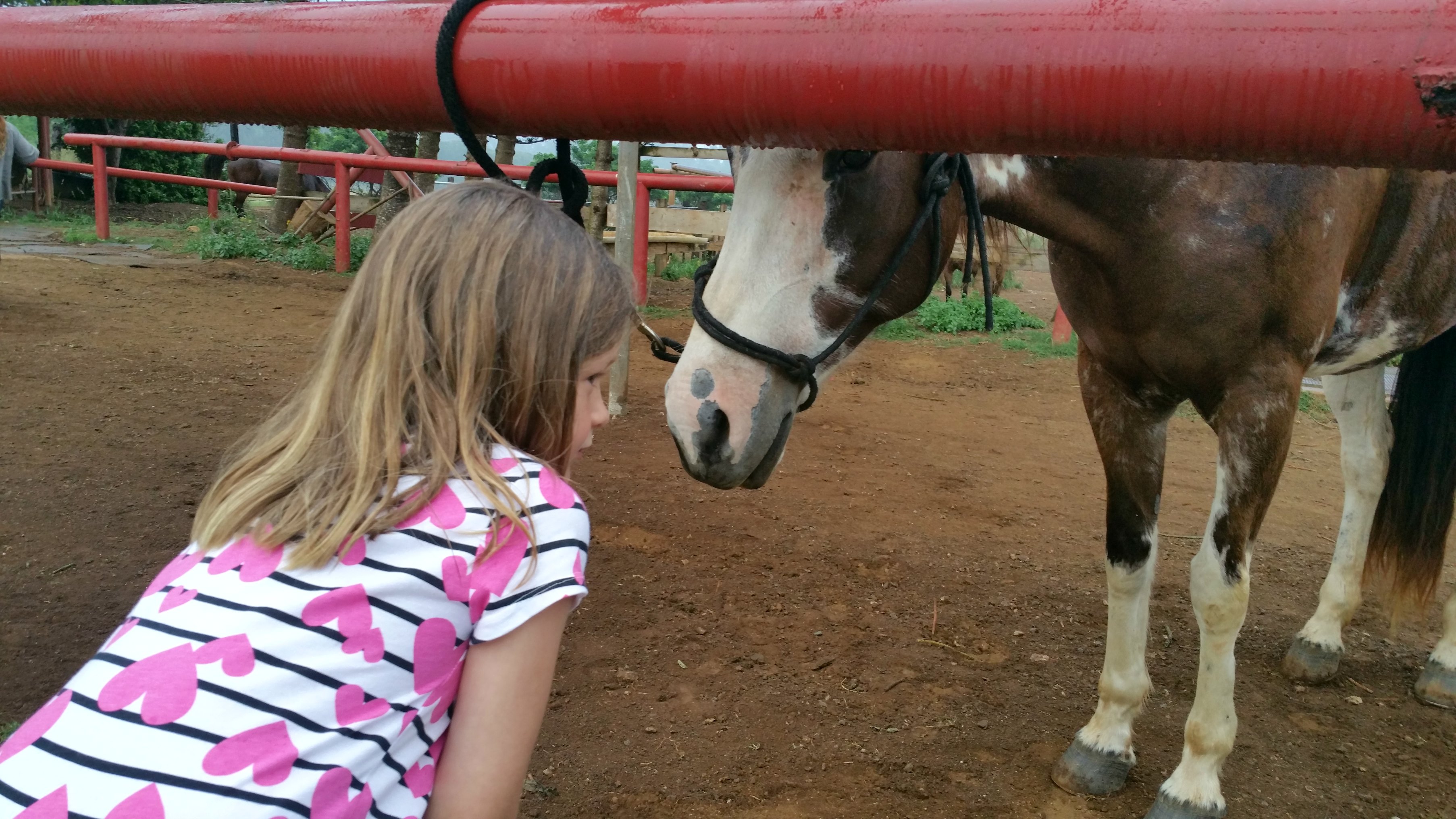 While Pete, Maddie, and Ashley went on an hour and a half ride, Emmy and I accompanied them for a half hour of it and then we headed back. Emmy was also the lead the whole time which worked out really well. She also talked non stop to her horse and guide. Surprisingly both were okay with it. Emmy asked our guide about practically every horse on the property and was ready to apply for a job when she is old enough. 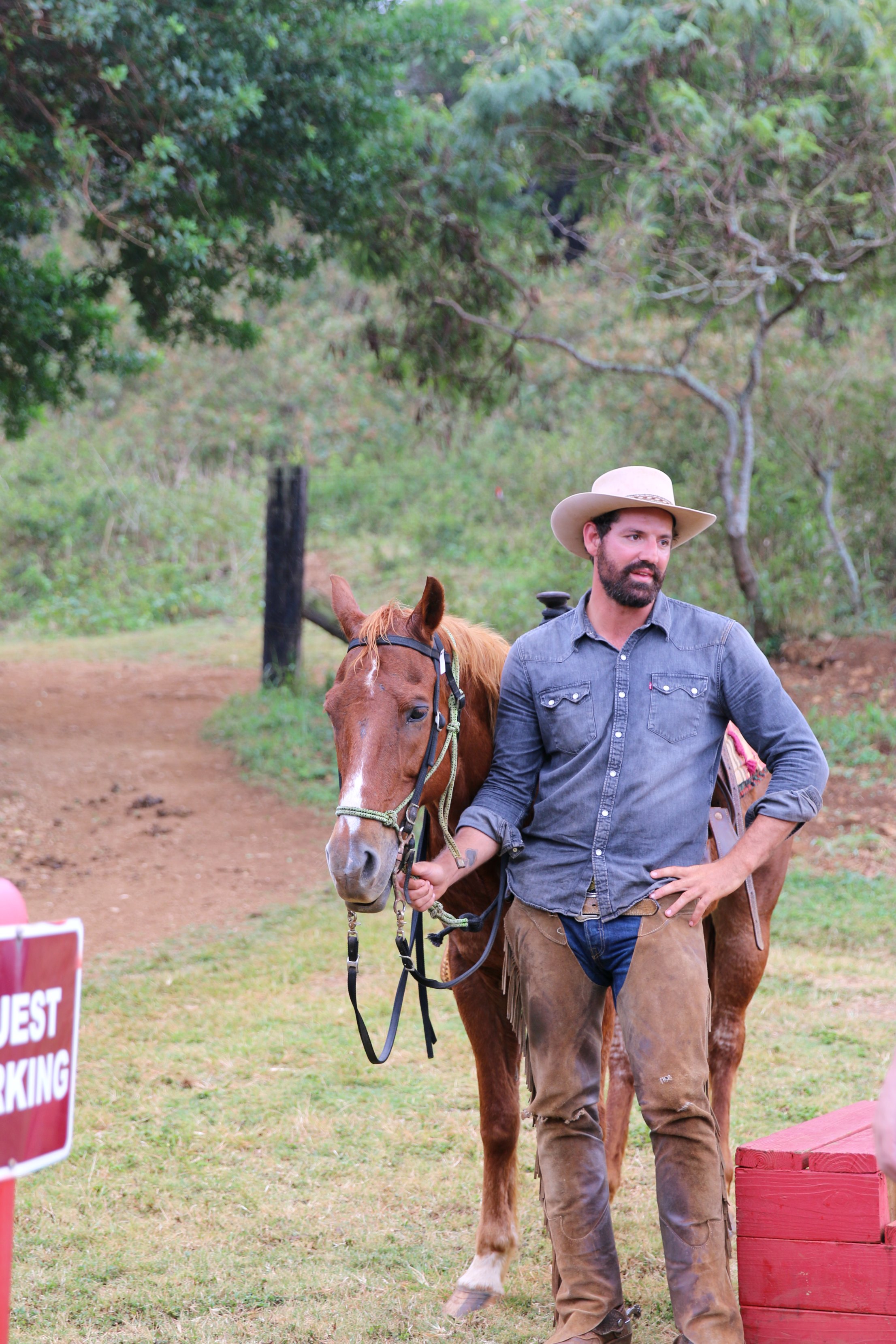 Our horses were so calm and relaxing to ride.

I was on a horse I called “boss lady”.  Not her real name, but oh my, she was in charge and everyone knew it. She was the head of the herd, and I can only imagine that she did a great job at it.

We were on a leisurely ride, and since I was riding behind Emmy, I didn’t want my horse to get too close to hers. “Boss Lady” kept her cool even when she wanted to be leading the group. I was barely pulling on her reigns at all and she would immediately respond. I think I was a little too eager with the slow down requests, especially since she was already going slow.  At one point, she completely turned her head around and looked at me as if to say “really? are you serious? How much slower can I go?”. It was awesome. She was the best riding horse I’ve ever been on and I know Emmy’s was equally awesome. I felt 100% comfortable on her and having my family on the horses they rode. 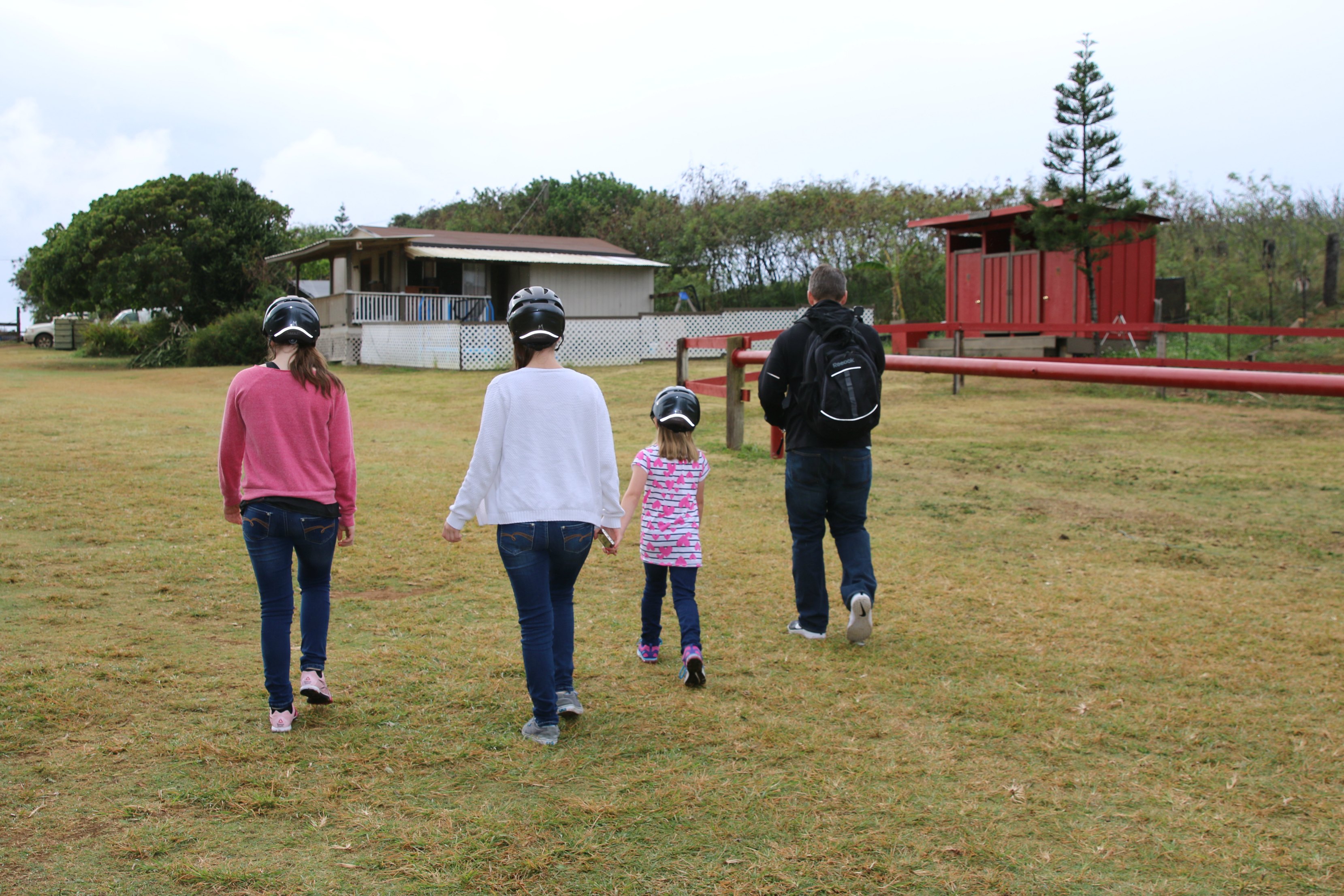 So let’s talk about Pete.

I was actually a bit worried if he would really like it. Having never been on a horse during his entire life, it really could have gone either way. I could tell by the look on his face as soon as he was on the horse that it was going to be a good time for all. He was smiling from ear to ear. I’m also the meanest wife ever and I warned him that horses can sense fear and I think I might have worried him… I also told him that riding a horse is really hard. Of course, I knew both of those to be completely untrue… but it was fun to tease him.

After he was back on the ground he asked when we were going again. He was sold on horseback riding. We all agreed it was a great way to spend time together and to see a new place. 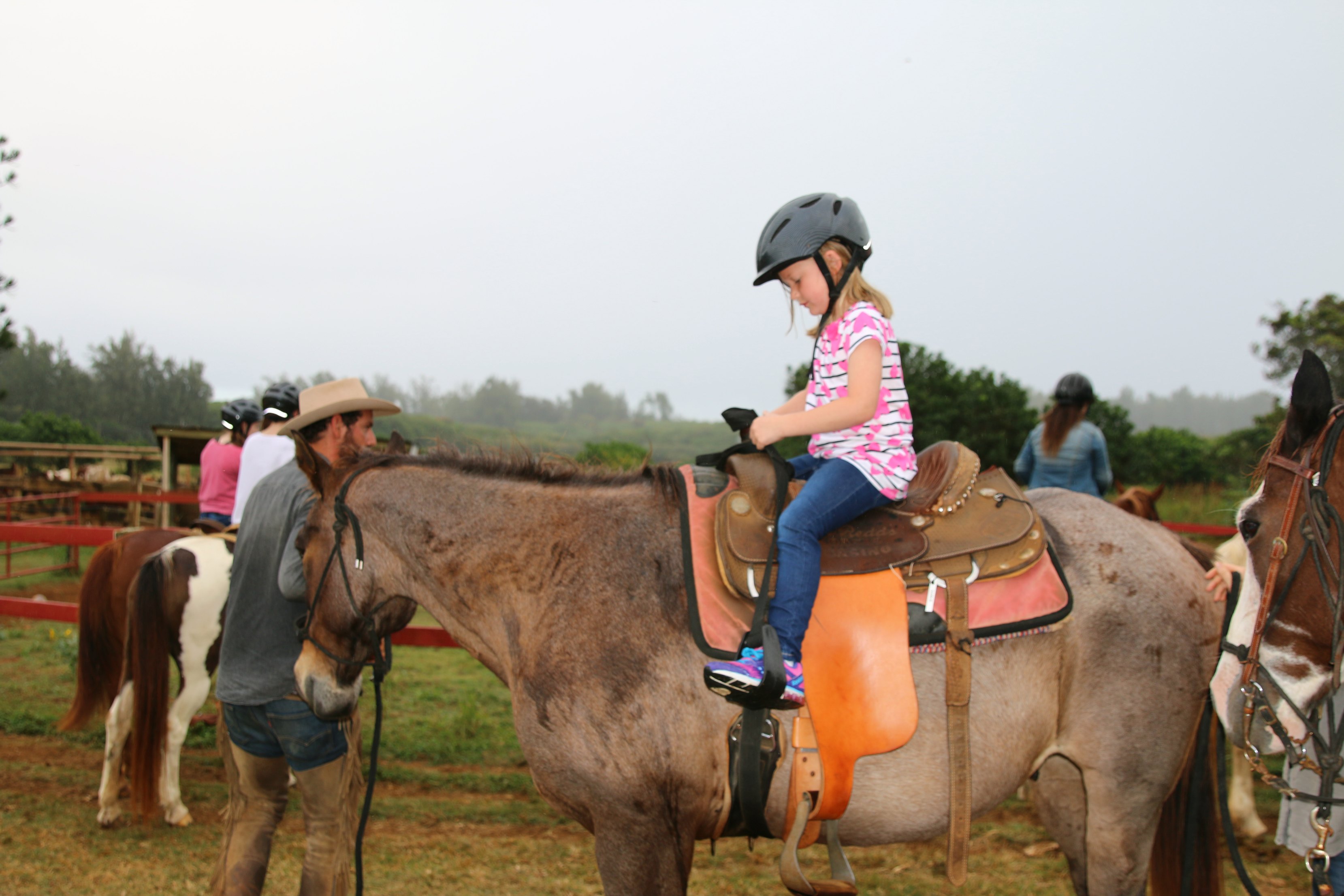 Pete and the girls were on the sunset ride while Emmy and I were on the pony ride. Gunstock Ranch also has other rides in addition to the ones we did. There are scenic ones during the day, moonlight rides, and even advanced trail rides… among others. There is definitely something for everyone and every level from first time rider to longtime rider. 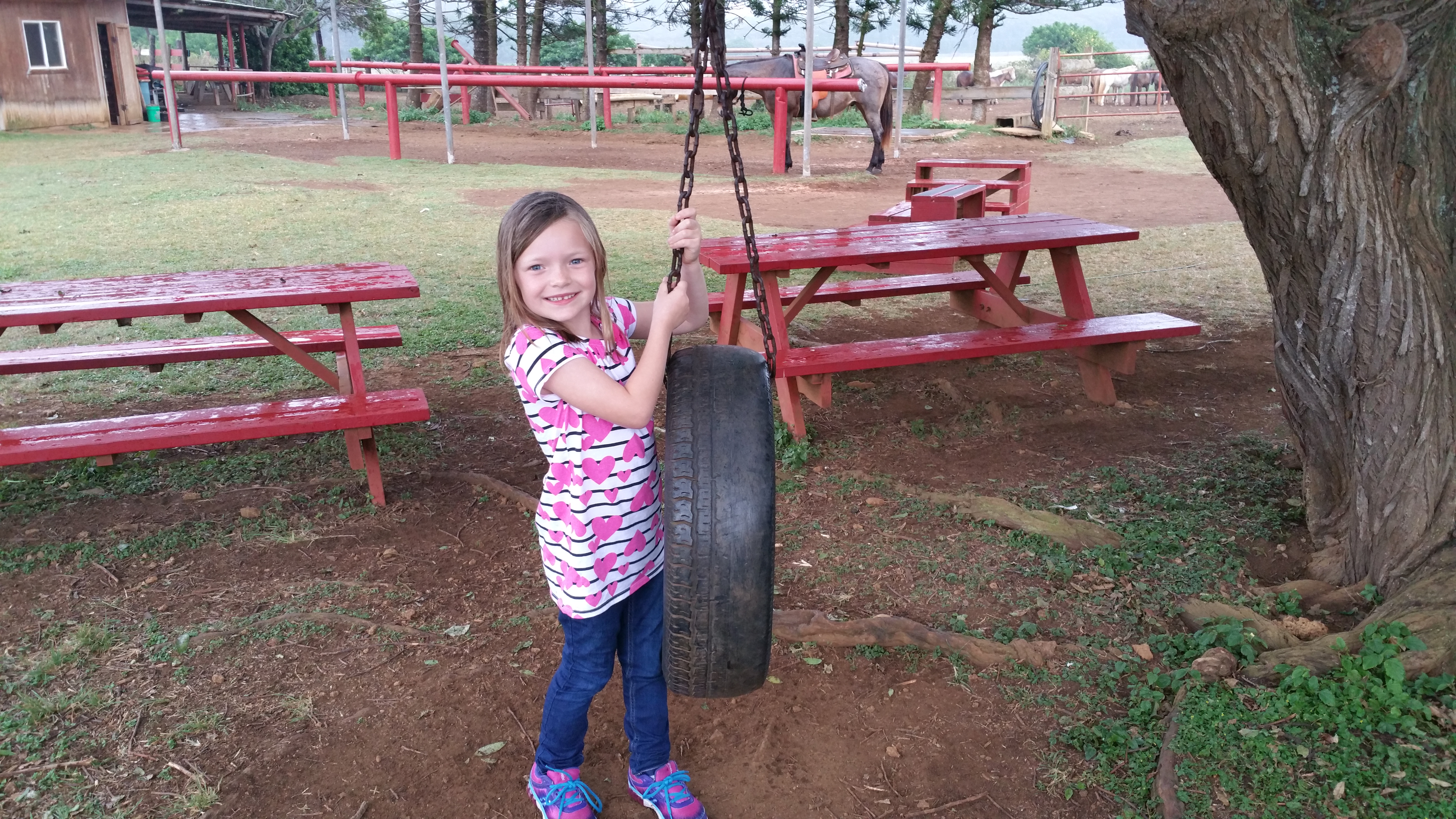 Here is a video of our Hawaiian horseback riding adventure:

Have you ever been horseback riding?