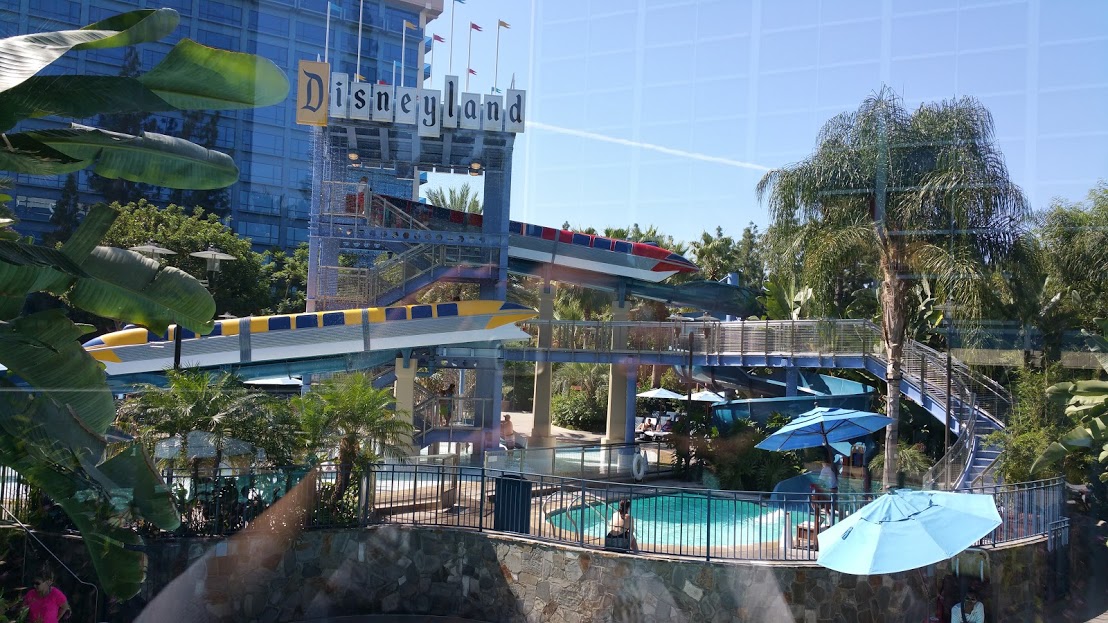 Last week we were invited to stay in the Frontier Tower of the Disneyland Resort while we attended Mickey’s Halloween Party! We loved it so much that I wanted to share it with you all.

Be sure to scroll to the bottom to read all about the history of The Disneyland Hotel! Celebrating 60 years! 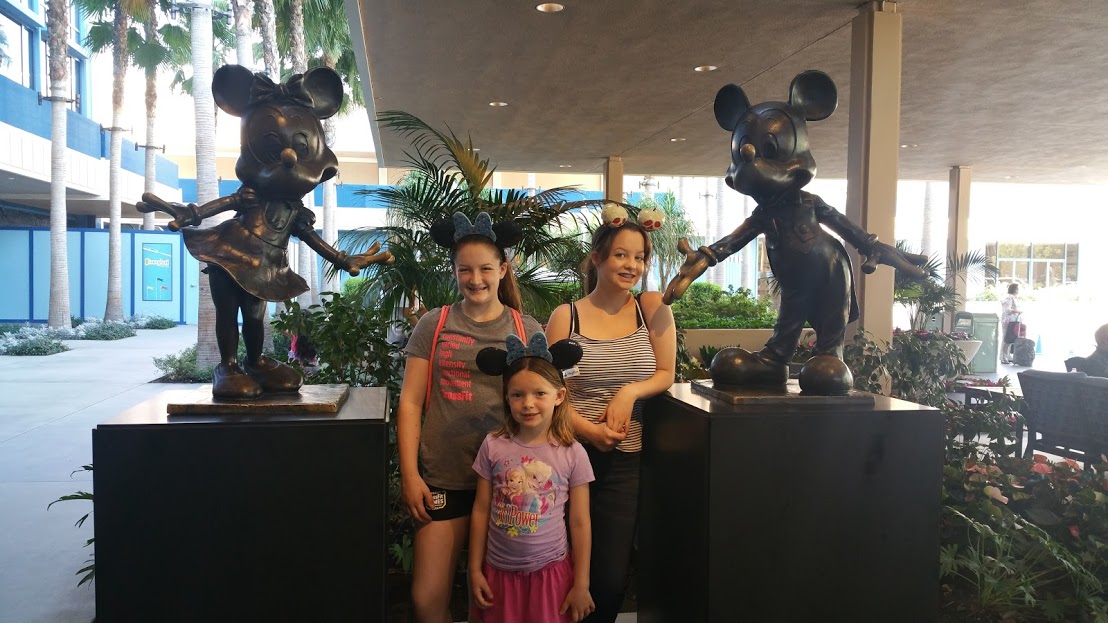 It’s a tradition for most people to take a picture with Minnie and Mickey when you arrive at the hotel. I always love taking pictures of the girls in this same spot each time we visit to see how much they have grown. It’s so fun to see other guests taking pictures here too. Right before we took this picture a couple asked me to take their picture and they told me they have been waiting years to visit and have this memory keepsake! How cool is that?

This visit we stayed in the Frontier Tower at the Disneyland Hotel.

We have stayed there before, years ago and it’s undergone a remodel since then. Each tower has a different theme and feel to it and all are equally fun. Our view this time was over the Monorail Pool!

Our room had two queen beds and a pull out couch. The couch pulls out in the coolest way over into a twin sized bed.  If you get one of these rooms be sure to check it out.

Here is the rest of the room. Awesome right? 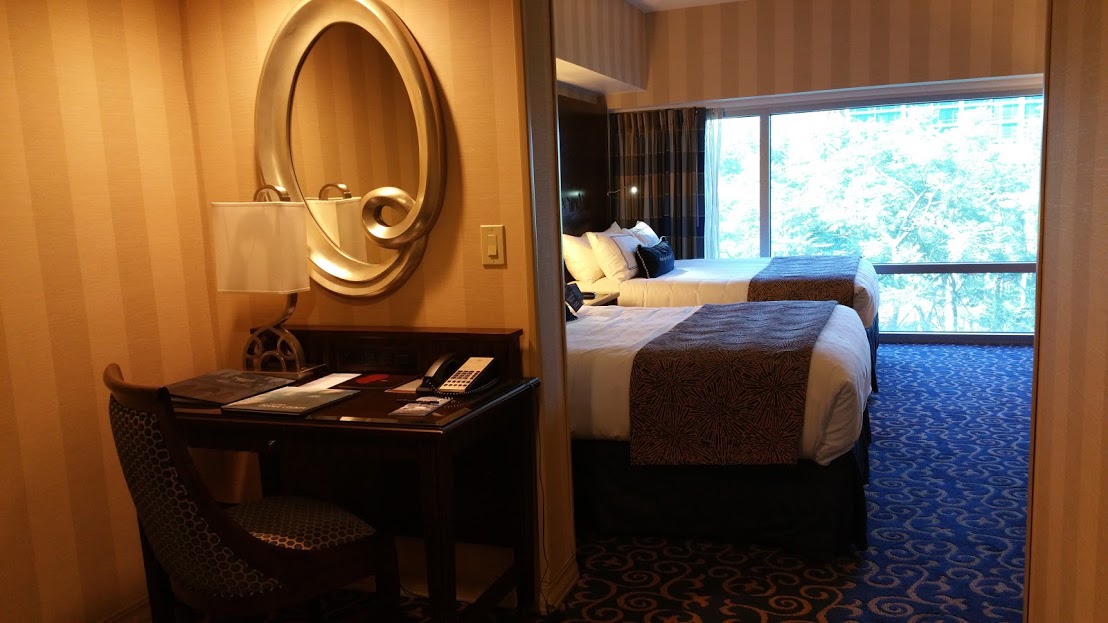 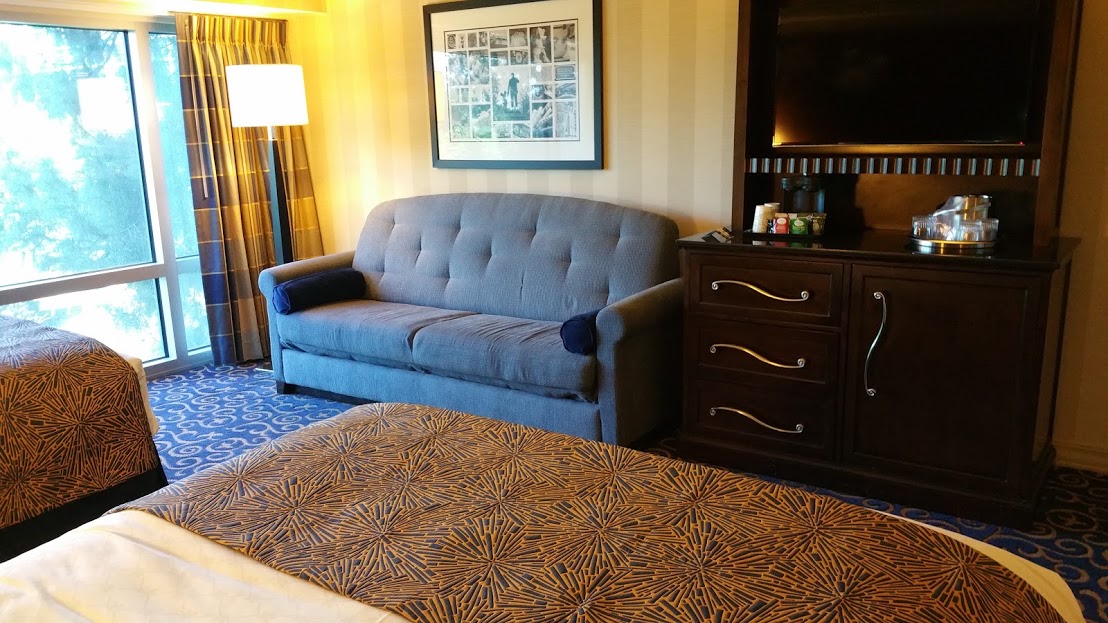 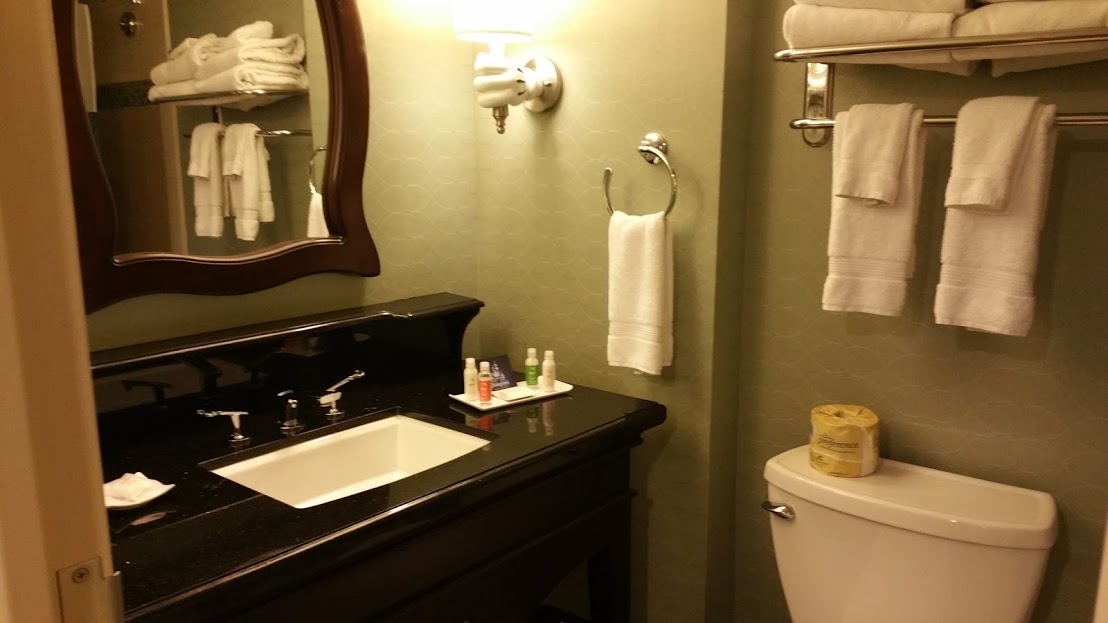 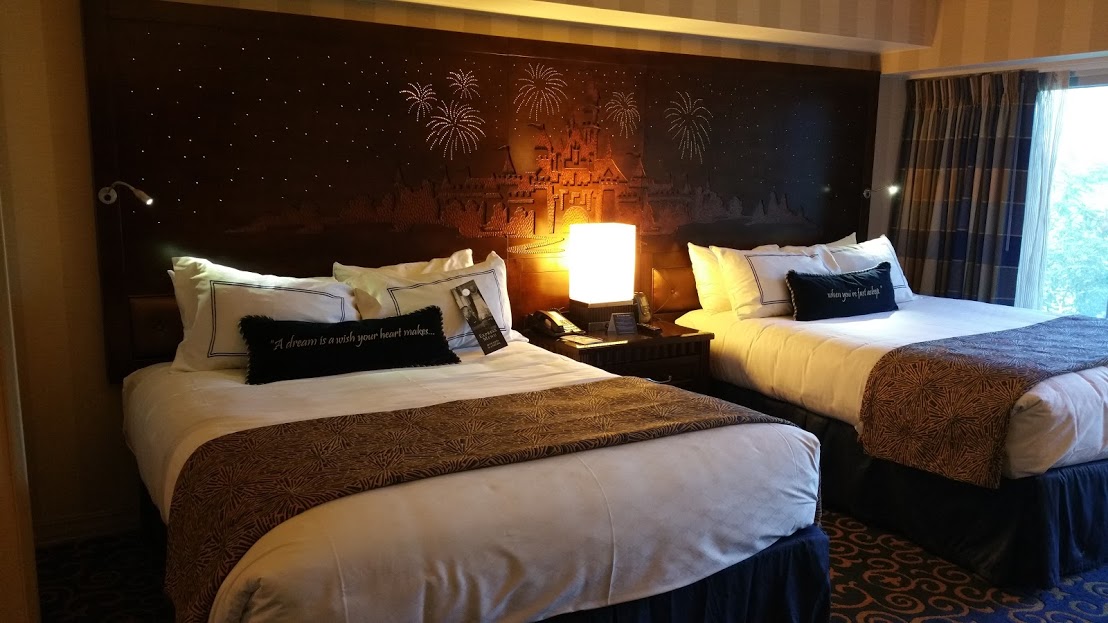 And then there is the good night kiss! Emmy was so excited to see it again! There is a little button you push by the lights that plays a song and the fireworks light up on the headboard! We *might* have played it 10 times! 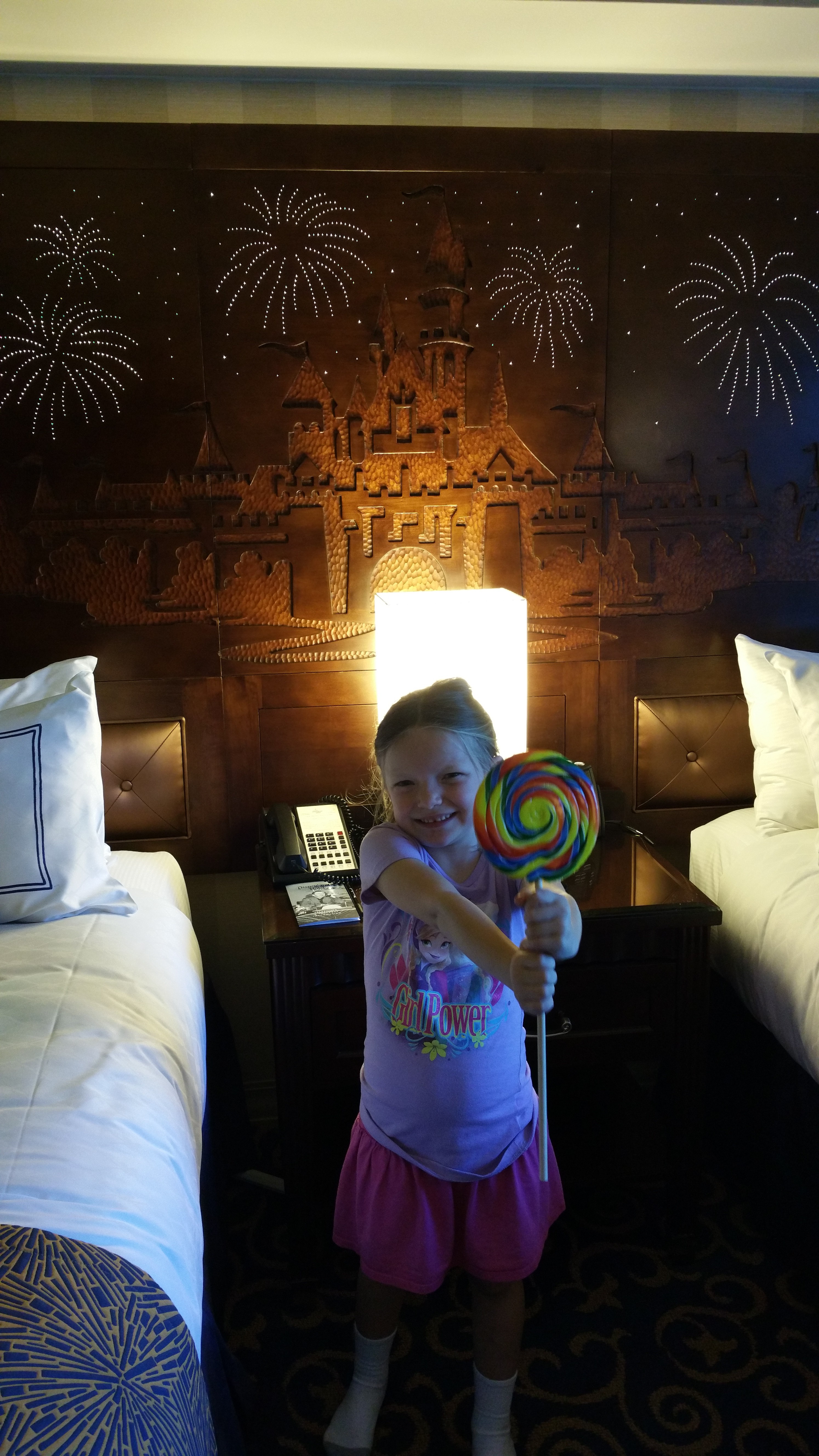 Breakfast the next morning was at Steakhouse 55.

I’ve wanted to eat here for such a long time. I’ve heard so many great things about the food and it was all I hoped it would be. The decor is old Hollywood with black and white photos of movie stars and it is a great place for a family breakfast or a date night dinner.

Do you see the hidden Mickey? 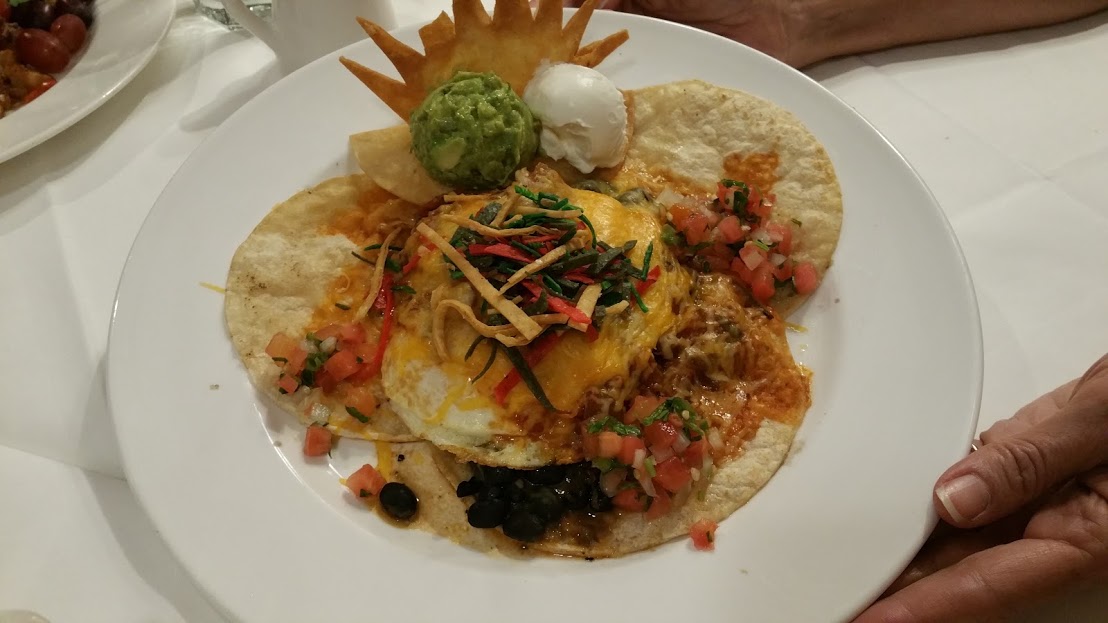 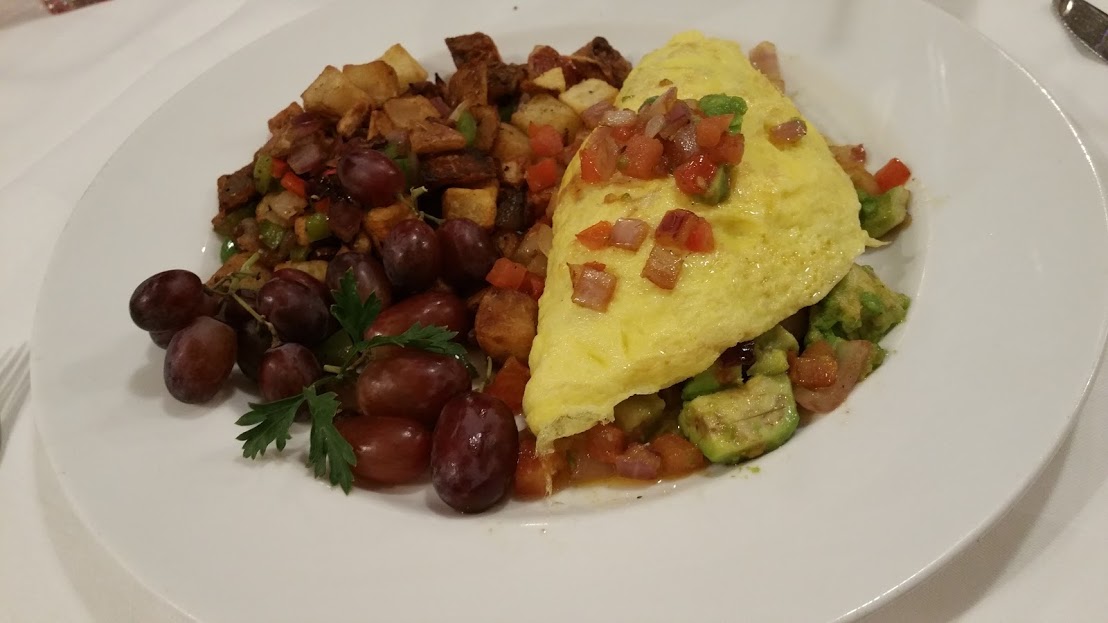 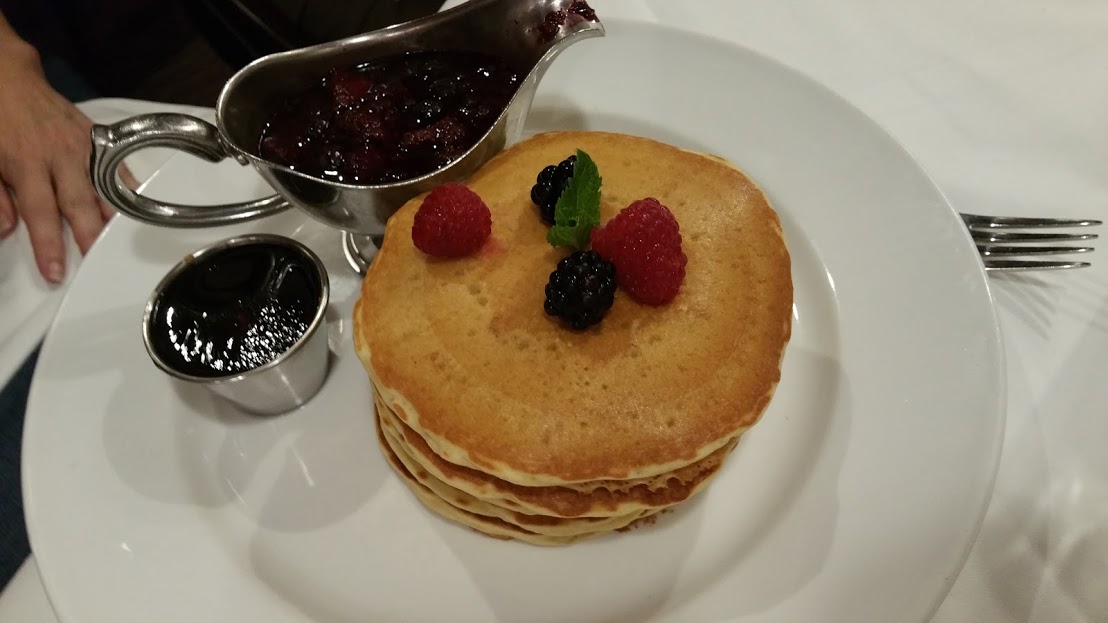 “When the Disneyland Hotel opened in 1955, just three months after Disneyland park opened to guests, the hotel launched a new trend in the tourism industry by welcoming families. In an era when hotels catered to businessmen, The Happiest Hotel on Earth was designed to accommodate and entertain children and it soon became Orange County’s first major hotel, starting a building boom that would help transform the county. Today, after 60 dazzling years, the Disneyland Hotel continues to welcome families, creating magical memories of their vacations at the Disneyland Resort.

“On its very first night of operation, the Disneyland Hotel had only seven completed guest rooms and an eighth used as a registration room,” said Jon Storbeck, vice president, Resort Hotels and Downtown Disney District. “Six decades later, the Disneyland Hotel has welcomed millions of guests and families. It now features 973 rooms and the footprint of the resort has grown to include two theme parks, three hotels and the Downtown Disney District, making the Disneyland Resort a premiere family vacation destination.”

The remarkable evolution of the Disneyland Hotel includes these developments:

“Much of what made the Disneyland Hotel revolutionary for its time in the ‘50s is still part of the hotel’s spirit today,” said Pilar Hamil, general manager of the Disneyland Hotel. “We were the first major hotel in the U.S. that catered to parents with children—with thoughtfully designed accommodations, family-friendly recreation facilities and of course, a tram that left for Disneyland every five minutes. The hotel experience was designed as an extension of the guest experience at Disneyland park.”

Contemporary, carefree and perfectly appointed with modern decor, the iconic Disneyland Hotel now pays homage to the shared history of Disneyland park and hotel at every turn—from its midcentury design to original park attraction artwork. The luxurious guest rooms sleep up to four adults, with suites available for larger groups. Other amenities include an immersive pool area, themed dining experiences and quick access to both theme parks and the Downtown Disney District. Guests of the Disneyland Hotel, as well as guests at Disney’s Grand California Hotel & Spa and Disney’s Paradise Pier Hotel, may enjoy admission on select mornings to either Disneyland park or Disney California Adventure park one full hour before the theme park opens to the general public.

This year, the Disneyland Hotel is sparkling with décor as part of the Disneyland Resort Diamond Celebration. In addition, the hotel is offering a “60 Years of Magic” Tour, a complimentary guided walking tour that explores the growth of the resort hotels and Downtown Disney District. Exclusive to the Diamond Celebration, this journey through the resort’s history provides a glimpse into the imagination behind its fun, immersive experiences.

Have you stayed at a Disneyland Resort Hotel?